On August 7, Gold in U.S. dollars, notched its all-time nominal high of $2,089 (It's been printing new highs in many other currencies for quite awhile now.)

Not satisfied with punishing the bulls during the day session, silver proceeded to drop another $2.30 in overnight Forex trading, but next day opened virtually unchanged just below $26!

Thus far, it's certainly lived up to its reputation popularized by David Morgan who has famously said that "Silver will either wear you out or scare you out!"

Those who were late to the game (within the last few weeks), found their positions either underwater or at best, break-even.

Even more so, pity the leveraged metals' ETF speculators who bet with options or futures.

When the margin clerk contacts you, it's time to instantly pay up or be closed out by your broker - no excuses!

This is where those who principally hold physical gold, silver, and platinum in hand (preferably not in a bank box), or in a secure storage facility like Money Metals offers, and who take the longer view, get to sleep easily at night.

Some investors have made several large buys over a few years; many have dollar cost averaged by the month or quarter; and still others had the courage to buy into declines when weak hands were selling out or afraid to buy.

My guess would be that most who read this column are in one of these accumulator sub-categories.

They decided how much they wanted to acquire, earmarked the funds, and activated their plan without paying a lot of attention to what the herd might be doing. They are investing professionally.

And if we're right about the size and duration of the current bull run, which saw record high gold prices and a virtual doubling of silver in just the last few months, these fortunate "stackers" are going to be quite happy in the coming months and years with the result of their efforts.

Don't be too concerned about large nominal price swings.

In fact, I can tell you with a fair degree of certainty, that "You ain't seen nothin' yet," whether in terms of the coming intraday/overnight price (volatility), or in regard to the ultimate high these increasingly precious – and scarce – metals are ultimately going to reach. You've no doubt heard analysts speak of "three-digit silver" and $8,000-$15,000 gold.

For my money, this kind of talk may not be all that far-fetched.

It would not take a societal collapse, civil war, or regional conflict among nations to bring it about either.

The massive debt incurred by our Federal, State and local level "leaders," not to mention most other countries' governments around the world, added to declining new metals' discoveries, shrinking ore grades and lengthy mine development lead times post-discovery, have the potential to bring these lofty prices into view all by themselves.

But the biggest reason you should want to have a solid position in physical metal, is that it serves as an "insurance offset" against a value decline in other assets you hold, and against the devaluation – stated as public policy by our government – which guarantees to make every dollar in your pocket worth 4-10% less each year, as far as the eye can see. You're holding real "money" simply by receiving it in exchange for some of your "paper promises."

Where could metals turn around toward new highs? If the price declines lately are just "corrective" in nature, where might their drop find chart support? 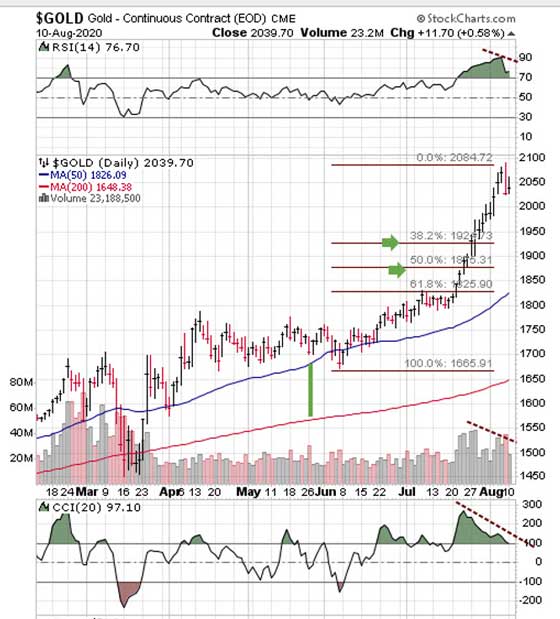 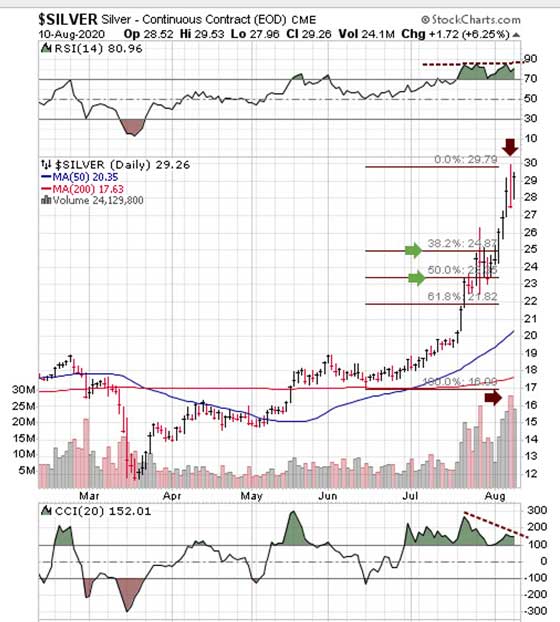 Prices could certainly plumb even lower without disrupting the bullish case, but these figures do offer a magnetic frame of reference, to which millions of traders around the world pay attention daily.

Technical Analyst, Gary Savage, who has a good record of ironing out such things, has stated in the public space that an intermediate (weeks to months) term correction is underway. He feels that the final washout (as low as $1,700?) "could be another six to eight weeks out."

But then there's this: During the evening of August 12, both gold (-$76) and silver (-$2.30 ) declined sharply, stopped near initial downside targets, then turned around in just one session.

What this could mean is that, just like how Mr. Market fooled most people who thought that silver would struggle for the rest of the year to get through multiple resistance areas between $20 and $26, let alone almost touch $30. Then look what happened in less than a month?

And even more amazing, how about gold? Cutting through its all-time US$ high at $1,923, and notching several closes above $2,000 soon thereafter!

What this tells me is that trying to predict when or where a given price point is going to be reached with these "restless metals" is about as risky as not buying any in the first place.

Yes, normally, we could expect a two month "consolidation/washout" of weak hands, before new tries to take out $30. But were the last six weeks normal? In a vibrant bull run like this, virtually anything is possible, and it behooves both you and me to keep that sort of thing foremost in mind.

For sure, if you're one of those people who either have not purchased as much as you want – higher premiums notwithstanding – or still have not even begun to accumulate, then, pray tell, why not?

The late Jesse Livermore, one of the most famous speculators who ever lived, once said, "It was never my thinking that made me the big money, it was being right and sitting tight, got that!"

Yes, maybe you'll have another six weeks to get your metals' shopping done before we see gold above $2,000 again and silver above $30. But then again, maybe not...

Either way, the big swings we're seeing may be offering one of the last and best opportunities you're going to presented with for quite some time to come.