On Monday, the price of silver continued its epic skyrocket. We say this without hyperbole, this kind of price action does not happen every day. Or every year. It occurs perhaps once a decade. And the same can be said for Monetary Metals writing so many articles about silver in the span of a week!

We wrote on Monday that fundamentals are keeping up, even though the price was rising (the hallmark of the last decade has been that rising abundance occurs with rising price—price brings more metal out of private hoards).

But before it could go live (it was written Monday night), the price was already moving down. And, holy cow, did it move down!

Before we get to the graph, we just want to say something about the consumption of capital. Everyone knows that when the price of something drops from $29 to $25, then those who paid $29 take a $4 loss. That’s true, of course.

However, we argue that as the price ran up from $12 to $29, it was triggering the consumption of capital.

But where did that cash come from? It’s not quite accurate to say that it was printed by the Federal Reserve. Better to say that the Fed’s actions motivated someone to pay $13.20 to take the silver off the hands of the first buyer.

The first buyer, who gets to spend $10,000, is spending the savings of the second buyer.

The second buyer is not thinking about the economic consequences of donating his savings to consume. He would never consume his savings. He does it unconsciously, because he expects someone to pay him $14.52, and give him not only his savings back but an additional 10%. So he can go purchasing with this new purchasing power.

And so it goes, all the way up, one person after another buying, and thereby forking over his savings to the seller, who converts his savings into consumer goods. And in turn getting even more of the next buyer’s savings.

Wealth Effect: What a Feeling

The term used by court-economists is “wealth effect”. The Fed gins up—well, something—when it prints “money”—or, well, pumps out something—and people feel richer. So they spend more. This is true whether they own stocks that are going up, or whether they own silver that’s going up. 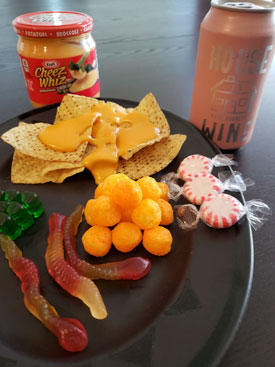 Not a cheese and fruit plate with wine,
as the Fed’s wealth effect is not wealth

The Fed is not increasing purchasing power. It is merely offering people a perverse incentive, so that they take perverse actions leading to perverse outcomes. Such as a net consumption of savings.

If you are shivering cold, stuck out on a mountain in the winter, drinking alcohol makes you feel warmer. It gives a warmth effect. But it’s the worst thing you can do. Alcohol does not actually make you warmer, it just sends more blood to your skin. Which makes you colder in the end.

As the wealth effect makes you feel richer but sends more savings to consumption. Which makes you poorer in the end.

Ironically, when the wealth effect comes to gold and silver, it is because the Fed, in collaboration with Congress spending like there’s no tomorrow, is making a credible show of destroying the value of the dollar.

Many people are rationally buying the monetary metals to avoid the losses that the Fed is trying to inflict on them.

And others, seeing the bull market, speculate so they can increase their purchasing power and feel the wealth effect for themselves.

As always, we blame the game, not the players who are forced to play.

When people cannot earn a yield on their gold (until now), nor much yield on their dollars, they are forced to seek a surrogate for yield: speculation.

In speculation, the profit comes from the next speculator’s capital. Whereas a yield comes from financing new production. Which is the opposite of a speculative profit.

Back to Our Regularly Scheduled Program

Here’s the chart regarding Tuesday’s action: 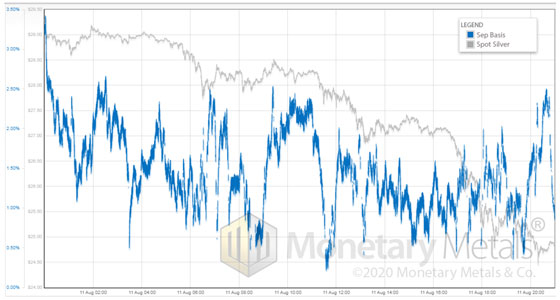 We’ll give our conclusion first: the basis fell quite a lot, along with the price drop.

That is, silver metal became less abundant in the market. The basis fell from around 2.5% (ignoring the skinny spike) to under 1%, while the price of silver fell four bucks. At times, the basis was well under 0.5%.

But look at all those moves up in the basis. Those were rallies of speculators in the futures market. At times they correlate to rises in price, such as 1am (London). But other times, no price rise occurs. Those were failed rallies.

In normal times, we would say that if speculators are buying like mad but price was not rising, then the explanation is selling of physical. But these are not normal times. The market makers are leaving the field.

Tuesday’s action was very different than Monday’s. The basis is moving differently. The relentless demand of the past weeks for physical was not present, though price drops still look like speculators selling futures, rather than stackers selling metal.

And, as always, Monetary Metals’ clients are earning interest on their silver (and gold!), regardless of the day’s market activity.