At some point, Americans are going to have to wake up.  With the Fed funds rate set at 0.25, Americans can no longer earn any interest with their money in the bank. I just checked the average interest rates paid on a five-year CD is a whopping 0.36% while a Money Market Account pays a hefty 0.11%.  Talk about what a losing game that is when the real inflation is running at 7-13% per year.

So, if money, or let’s correctly use the term “currency,” is a losing proposition, then why aren’t more Americans acquiring precious metals?  Well, actually a few are, but in paper form.  There has been a record movement of funds into the Gold and Silver ETFs over the past several months.  However, that really isn’t a safe investment as it’s hard to know if the custodians of the ETFs hold all the metal they say, or if it is over-subscribed.

According to GoldChartsRUs.com, there is supposedly 42 million oz (Moz) of gold held in the vaults backing the GLD ETF and 566 Moz in the SLV ETF.  Again, no one knows for sure how much of the metal is stored in the GLD & SLV inventories.  Worse yet, some metal may have more than one owner.

Regardless, if we look at the following chart, Americans need to start waking up.  With the U.S. Debt now $4.5 trillion higher than it was a year ago, the interest expense Uncle Sam paid to Bond Holders is $61 billion less.  That’s correct.  Even though the U.S. public debt has ballooned to $26.5 trillion (July 31st, 2020) versus $22.0 trillion (July 31st, 2019), Uncle Sam only paid $436 million in interest expense in the first ten months of the fiscal year (Oct-July). 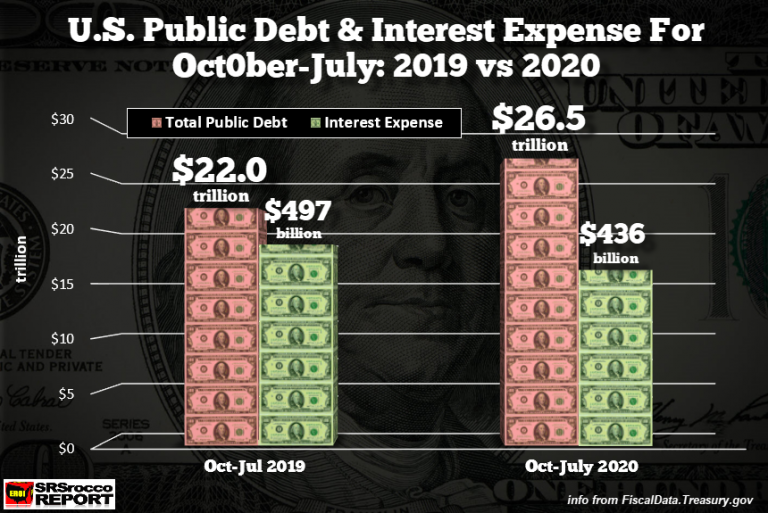 I did a quick calculation of the average interest rate for each based on the first ten months of the year.

While the average Bond Holder interest rate is now earning less than the typical Certificate of Deposit, the shorter-term Treasury Bills are paying even less.  Someone holding a 1-Year Treasury Bill makes 0.011 while a 30-Year Bonder holder gets 1.50.  With the real inflation rate running at 7-13%, earning 1.5% over 30 years is a losing proposition.

I was quite surprised to see the U.S. Interest Expense only $436 million for Oct-July versus $497 for the same period last year. With the U.S. Government increasing the public debt by $23 billion a day since the beginning of 2020, it’s no surprise that the Fed has to push interest rates even lower.

If we look at the total Global Gold and Silver investment holdings, they aren’t that much compared to all the Stocks, Bonds, and Real Estate in the world. 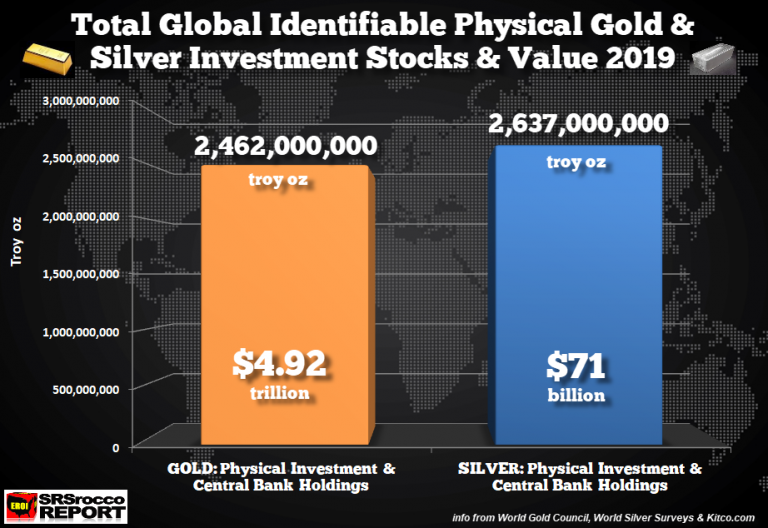 Just another $5 trillion moving into gold would double its current price of $1,930 to nearly $4,000.  And if only one-tenth of that went into silver ($500 billion), it would increase the current $27 market price seven times to $189. That would be a Gold-Silver Ratio of 21/1, not too out of the question when the world begins to head over the ENERGY CLIFF.