Since posting new record highs in early August, the gold market has consolidated above $1,900/oz support. 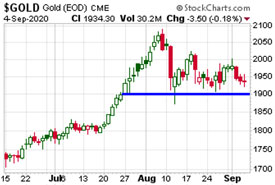 A close below the $1,900 level would carry bearish implications for the near term.

Alternatively, a move back above $2,000/oz would likely be followed through to the upside with a rally to fresh highs. Silver, in turn, could be expected to run to new multi-year highs above $30/oz.

The question is whether a deeper correction occurs first… or the major trend accelerates.

Inflation rates may be set to accelerate as the Fed aims for an “average” of 2%. According to central banker logic, this requires pushing inflation above 2% for an unspecified period.

Holders of low-yielding U.S. dollar-denominated debt instruments should be quite concerned about the prospect of losing purchasing power.

The Chinese government apparently is. The second-largest holder of U.S. Treasuries, worth over $1 trillion, is now gradually selling them.

Chinese economist Xi Junyang announced last week that the country would aim to hold $800 billion in U.S. debt “under normal circumstances." But, he added, “China might sell all of its U.S. bonds in an extreme case, like a military conflict."

For now, the decline of the dollar appears likely to proceed at a more gradual pace. There will likely even be mini rallies along the way.

Given the spate of bearish developments to hit the U.S. dollar over the past few weeks, it’s possible currency traders have grown too negative toward the buck in the very near term. A counter-trend USD bounce would likely put downward pressure on precious metals prices.

Of course, gold and silver stand to gain against all fiat currencies that trade against the U.S. dollar.

So regardless of whether the dollar rises versus the euro or the yen or the yuan over any given period, it will not become any sounder of a currency – and will certainly not diminish the long-term case for owning physical precious metals.