Gold prices closed Friday at a 7-week high above $1,950/oz. The monetary metal also appeared to break out of a larger consolidation pattern that formed after all-time highs were hit in August. 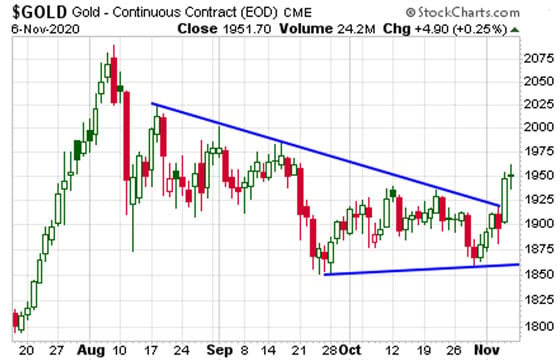 But with news today of a vaccine breakthrough, gold has fallen back below its breakout point. It is now retesting support in the $1,865 range and could consolidate for a few more weeks, though in these volatile market conditions another plunge lower or a whipsaw breakout higher is possible at any time.

If it rallies back to $1,950 this week, however, traders expect it to break above $2,000/oz this month and make a run to new all-time highs by the end of the year.

That outcome would likely be associated with a falling U.S. dollar. The Dollar Index plunged 2% last week and is now on the verge of breaking down to new lows for the year.

If it also ramps up regulations and threatens to impose taxes that scare investors, then safe-haven demand for gold and silver could accelerate dramatically.

For now, though, Donald Trump is still in office and hasn’t made any plans to move out. Uncertainty remains about the final election results and what kind of transition, if any, will take place.

One thing that will remain constant is the Federal Reserve. Its printing press will keep running and its unelected Board of Governors will remain firmly in power.