One of the most bullish backdrops for precious metals is an environment of negative real interest rates – that is, when bonds and cash yield less than the inflation rate.

With inflationary pressures picking up and the Federal Reserve showing no signs of lifting its benchmark rate anytime soon, real short-term rates could fall even further into negative territory in the months ahead. 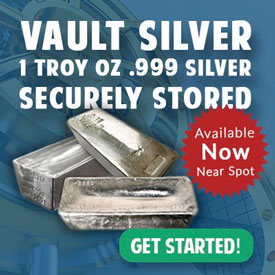 Long-term yields, however, have been moving slightly higher in nominal terms.

Higher bond yields have helped lift the U.S. Dollar Index and restrain gold and silver prices so far in 2021.

The 30-year yield rose to nearly 2% on Friday. While still quite low historically, a breakout above 2% could be psychologically important for markets.

The Fed has long spouted a 2% inflation target. It now aims to engineer a slight overshoot for an indefinite period. (And don’t forget that the government-reported inflation rate underreports true inflation. A 2% rate generally means we have 4% or higher inflation in the real economy.)

But if bond yields overshoot inflation, that would defeat the central bank’s purpose. One of the Fed’s goals is to help the U.S. government and other large debtors steadily chip away at their real obligations.

President Joe Biden and Democrats in Congress are trying to ram through a $1.9 trillion spending bill that will of course have to paid for through additional borrowing. The last thing Treasury Secretary Janet Yellen wants is to issue new bonds that require the government to pay positive real returns to holders.

Fortunately for the former Fed chair, she has a direct line to her successor Jerome Powell. Whatever the Treasury wants in terms of central bank bond purchases, it will presumably get. That means long-term interest rates will likely not be allowed to rise much further from here.

The next engineered bond market “rally” (drop in yields) could help fuel the next leg higher in precious metals markets. The more yields sink below inflation and expectations of future inflation, the more attractive gold and silver become as alternatives to bonds and cash.

Naysayers sometimes knock precious metals for having no yield at all. While trivially true, gold’s total returns over time are closely correlated to the actual rate of currency depreciation (which may be far higher than what the government reports as the official inflation rate).

Over the past 20 years, physical gold has returned more than 580% – far better than interest-paying Treasuries – and that’s despite gold prices now being well off their all-time highs.

The upshot is that unlike fixed-income paper assets, physical precious metals generate no annual tax liabilities (unless and until sold for a profit). Gold, silver, platinum, and palladium bullion products can also be held within IRAs for maximum tax advantage.

There is no telling when, if ever in our lives, money market funds or Treasury notes will carry positive after-tax, after-inflation yields. In the past they have – particularly in the early 1980s when double-digit yields combined with falling inflation to usher in a great bond bull market.

Back then a case could be made that zero-yielding gold and silver coins were comparatively unattractive. Today, however, interest rates on paper remain near historic lows despite a recent steepening of the yield curve. And inflation risk is almost entirely to the upside.