Is the Reckoning Nigh for Silver Shorts?

Investors are buying silver in vast quantities – in whatever form they can get it.

Smaller silver bugs are buying it a few ounces at a time from scarce retail inventories. Whales are accumulating millions of ounces via the silver ETFs or by standing for delivery of COMEX futures contracts.

Unless the bullion banks and other shorts can finally engineer a price smash, they may have to stop selling paper and start buying a lot of physical.

If the short sellers are naked, i.e. not hedged with long positions elsewhere, a genuine short squeeze driving prices higher could commence.

Over the past several trading days, the silver market has simply been resilient. Prices haven’t risen. More importantly, they haven’t fallen much either.

Long investors continue to buy as the paper sellers dump massive amounts of unbacked silver contracts on the market.

We’ll know by the end of this week, when the March futures contract goes off the board, how many of those contracts are held for delivery of actual bars.

It is expected to be a record number – perhaps 2-3 times the average. See below. 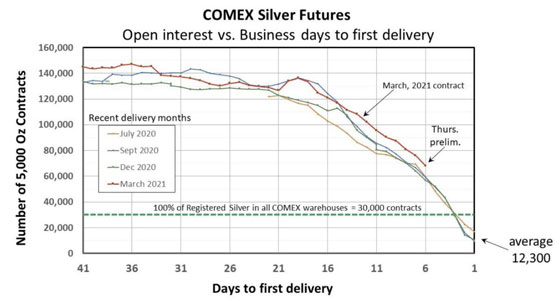 If the number of contracts held is 30,000, the demand would, in theory, completely wipe out the entire stockpile of registered bars in the COMEX vault system.

That almost certainly won’t be allowed to happen. The contracts provide the option of cash settlement in the event physical silver is not available in adequate quantities.

Widespread cash settlement would at least put the lie to the notion that a futures contract is a proxy for the actual metal. In a sense, that would be good thing.

The COMEX has been a tool for manipulating prices, creating price volatility, and discouraging ownership of the physical metal since gold and silver futures trading started at the exchange during the 1970s.

The number of “Registered” bars has been in decline in recent months and that trend is accelerating. The stockpile dropped by 5.5 million ounces last week.

COMEX bar inventories are being accessed by nervous speculators who want the actual bars and by mints and refiners who are scooping up metal to convert into retail-sized coins, bars, and rounds.

The situation doesn’t appear to be any better in the larger London physical markets.

Ronan Manly of BullionStar recently estimated there are only about 150 million ounces of silver not locked up by ETFs in London vaults. Much of that remainder may be owned by investors who will not be willing to sell unless prices go higher. 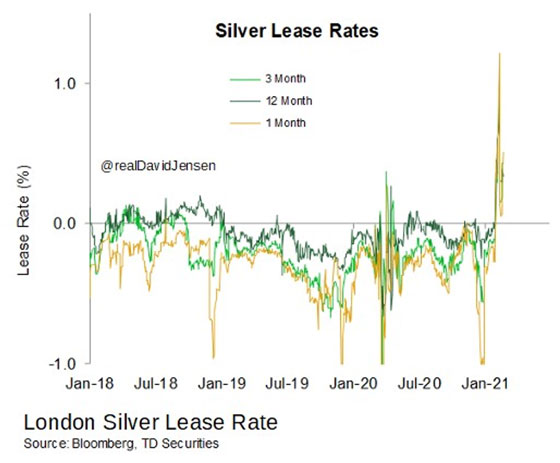 The spike in lease rates last week is much larger than the jump seen nearly a year ago when a shortage drove thousand-ounce bar premiums higher.

Bullion banks, and other shorts, lost hundreds of millions of dollars trying to get hold of bars with which to meet delivery requests.

Silver leases are a mechanism shorts can use to essentially borrow bars today for the purpose of making good on delivery requests. Usually this is possible without much cost.

In fact, bar owners typically defray some of the cost by paying a small fee to lessees. This is because the lessee takes on the cost of storage and insurance. That is one reason why the chart above shows lease rates as negative most of the time.

Leasing silver may be an option for bankers and other shorts, but it carries substantial risk in times like these. They are required to return the bars at the end of the lease term.

Unhedged shorts will get crushed when/if they have to buy the needed silver at much higher prices.

Silver prices have not done much since the surge past $30/oz was reversed on February 1st. Those just looking at the price might assume the effort to squeeze short sellers has failed. However, based on developments behind the scenes, it appears the squeeze may be just getting started.