As top officials around the world convene this week for a “climate summit,” President Joe Biden’s administration is planning the most radical expansion of government’s role in the economy since FDR’s New Deal.

The objective is nothing short of transitioning the entire U.S. and world economy to “clean energy” – as determined and directed by central planners.

First it was a Green New Deal, then it was a Great Reset. Now, apparently, it is a Giant Leap.

Or, as the United Nations put it in an article published last December (“Green Reset: The Case for Greening the COVID-19 Recovery through Cities”), it is a Green Reset.

On Wednesday, Treasury Secretary Janet Yellen delivered remarks to the Institute of International Finance calling for a radical restructuring of the whole U.S. economy.

“President Biden has outlined an ambitious strategy to transition the United States to net-zero emissions and has mobilized the entire government to achieve it,” Yellen said. “At Treasury, our goal is to take this ‘whole-of-government’ approach and turn it into a ‘whole-of-economy’ approach.”

During the election campaign, Joe Biden had insisted he didn’t support the Green New Deal as dreamed up by socialist Rep. Alexandria Ocasio-Cortez. But now his administration is working to implement it on a slightly scaled-down basis.

The word “China” rarely escapes the mouth of AOC, though. For her, the U.S. is the problem – and Biden’s planned power-down of the conventional economy doesn’t go far enough or proceed rapidly enough.

"We're going to transition to a 100 percent carbon free-economy," Ocasio-Cortez said this week as she reintroduced the Green New Deal with Massachusetts Sen. Ed Markey.

“The Green New Deal isn't just a resolution — it is a revolution,” Markey said.

Whether the Green Reset is ever fully implemented remains to be seen. But some aspects of it, like the increasing use of electric vehicles, are already playing out and will continue to do so in the years ahead.

Switching from gasoline-burning engines to battery-powered motors on an increasingly large scale will have profound implications for investors. Superstar fund manager Cathie Wood of Ark Invest sees the growing EV market as one of the most compelling investment themes of the decade.

But that growth is not inevitable, even with improving technology and more stringent government mandates. The electrification thesis depends crucially on metals including copper, nickel, lithium, and silver remaining plentiful and affordable.

Over the past year, metals prices have skyrocketed. They could skyrocket further on rising demand and diminishing reserves – not to mention the inflationary policies of the Biden administration and the Federal Reserve.

Among the biggest winners of the Green Reset could be metals investors.

There will, no doubt, be winners and losers. Going forward, investing in broad stock market index funds may not work out as well as it has in recent years.

“In the unavoidable shift to clean energy, not every American worker will win out in the near term,” admitted Biden’s Secretary of State Antony Blinken.

As some industries suffer and jobs disappear, there will be renewed calls for stimulus checks or a more permanent Universal Basic Income program. Officials will have no hesitancy in creating currency out of thin air in order to prevent a revolt among the dispossessed masses.

All this adds up to enormous inflation risk for workers, retirees, and investors.

One of the best inflation-protection strategies in this environment may be to own physical silver. It is both a monetary metal and a Green energy metal – used in everything from solar panels to electric vehicle motors to battery charging stations.

In the event that the Green New Economy eventually collapses like Communism under the weight of excessive restrictions and controls on productivity, then industrial demand for metals would fall also. 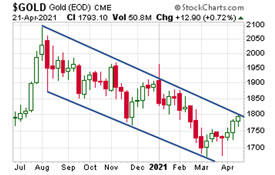 That’s not likely to happen in these still early stages of the Green Reset rollout, but when/if it does, then gold may shine as the ultimate safe haven.

On Wednesday, gold prices rallied up to a key area of resistance near $1,800/oz.

A breakout above the multi-month down-trending channel, confirmed by a strong weekly close, would have hugely bullish implications for precious metals markets.

As great as gold’s potential is amid the accelerating depreciation of the U.S. dollar, silver’s is even greater amid the Green Reset.