Why Copper Will Help Define Silver Supply through at Least 2030

70% of silver supply comes as a "by-product" of base metals, e.g. lead, zinc, copper, and (some) gold. With the race to find, develop and market new copper projects, one might assume that "since new copper supply will come online during the next few years, it also means that a 'lot of silver' will also become available."

But these assumptions – on both counts – are almost certain to be incorrect. Here's why…

Copper production streams for the rest of the decade will be constrained by several core, difficult to resolve considerations. First, most projects have been mined for decades; some for over a century. Grades and reserves have declined, while production costs have surged.

Another set of factors, substantially more problematic, hold the potential to pronounce life or death verdicts on many of the few current exploration-to-production stories.

When Ivanhoe's Kamoa-Kakula copper mine begins production this year it will become the world's second largest copper operation, eclipsed only by Chile's Escondida. In Resource and copper grade, it may be without peer.

Located in high country-risk DRC – and JVd with DRC and Chinese partners – it provides a case study of ESG best practices and "green copper production," by Robert Friedland, perhaps the only operator who could pull it off.

Even the casual observer will find a tour of their site at https://www.ivanhoemines.com/ to be highly informative.

Rather unusually, the Kipushi Cu-Zn-Ge project, along with Kamoa-Kakula, does not appear to have significant silver values in the ore mix. So, in spite of the relatively large amount of copper produced, it will have no measurable effect on global silver yield.

Just because a mine is producing, doesn't mean it's "home free" for the life of mine (LOM).

Freeport's Grasberg in Papua Province, Indonesia, discovered in 1987 and billed as the world's third largest copper reserves and second largest gold reserves, is a case in point. It still has an estimated 30 years of production.

However, ESG issues persist, and given the intense scrutiny placed on producers, as well as proposed new operations, long-standing issues may well intensify. For one, tailings are released into a lake, in addition to two connecting rivers and then deposited into the Aufura Sea, south of New Guinea. Grasberg is not unique in having to deal with local concerns, and questions of environmental impact.

Peru and Chile (responsible for 42% of global production) have called recently for a 75% tax on production and rewriting of water use agreements. Bottom line. Do not assume that because a mine is currently churning out "x tonnes" of copper, this supply source is "in the can".

A new phrase/concept is starting to be heard. It is called “electron accountability.”

Grant Isaac, CFO of Cameco, echoed it in a presentation in May. To put it simply 1,500 corporations around the world have now adopted a corporate policy addressing climate change.

Essentially, these corporations are saying they can no longer be oblivious to where the electricity they are securing from the grid is coming from.

For instance, is it coming from clean hydro or nuclear or from dirty carbon emitting coal? They can no longer hide behind the excuse of saying “we didn’t know how the power was being generated.” This should boost the fortunes of nuclear power by decades-end, but poses still another question mark for copper.

"For anyone who doubted the momentum behind the ESG movement in the United States one only needs to look at the events of May 26, 2021. On that date a less than 1% shareholder of Exxon Mobil (XOM), “Engine No. 1” – who had been leading a proxy fight for board representation and a redefining of XOM’s corporate philosophy – was successful in securing two Board seats… think about it… less than 1% shareholder of XOM was able to push around a corporate giant. Can anyone out there wonder why every corporation is developing a corporate policy with respect to ESG? 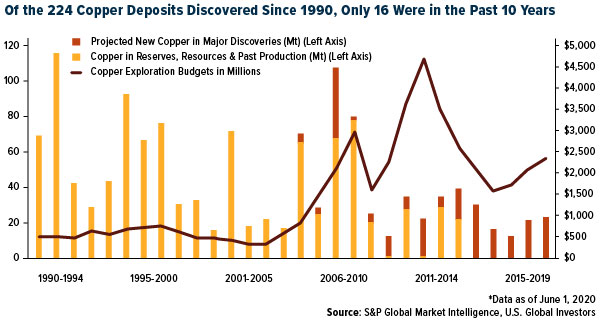 Given these headwinds facing the few copper deposits coming online, it's not a stretch to assume that more new silver might come from the relatively few new primary silver mines.

MAG Silver in Mexico should be producing this year, with an output rivalling primary silver leader First Majestic. This writer is aware of three much larger projects – one being Pascua Lama, straddling the borders of Argentina and Chile.

Another is Navidad, a 700-million-ounce silver resource located in Chibut Province, Argentina, which has been forestalled by the unwillingness of the governor to allow the use of cyanide. Each could annually contribute 25 million ounces of silver supply. But Pascua Lama will most likely never go into production. Even if Navidad were permitted tomorrow, it could take 5 years to get up and running.

The third, Pebble, a 100-year operation proposed massive low-grade Copper-Gold-Silver monster for Alaska's Bristol Bay area, would sit square in the headwaters of the largest Sockeye spawning area in the world. It persists in trying to get permitted, even though, after spending several hundred million dollars, several of the world's largest mining companies have walked away.

To say Pebble has become Ground Zero for the global environmental, local opposition movement would be an understatement.

So if you get the feeling that through at least 2030, new source silver is not going to make a big difference... you're probably close to the mark.

Fred Davidson, CEO of Impact Silver a junior miner deriving over 90% of its income from silver - not from "silver-credits" (calculated by adding base metal income to silver output and dividing the total by the price of silver), says succinctly: "Deposits can be found, but mines have to be made."

A number of experienced analysts and miners, including David Morgan, Keith Neumeyer and Rick Rule now see three-digit silver as more likely a question of when, than if.

But if after all this time (and understandably tired of waiting), you're still on the fence about starting or adding to your stash, don't expect Mr. Market to send you a personal invitation beforehand.