There is sometimes a tendency to confuse ends and means.

For example, in traveling through an airport there is extensive inspection of passengers. Before you are allowed to board an airplane, you must go through a process that is intrusive and increasingly invasive. This is deemed to be security. How do we know it makes us secure?

Because it is annoying.

See the switcheroo? The degree of disruption of your schedule and possessions bears only a faint relationship to the degree of safety.

So it is with many other regulated areas. Banking is no exception. It’s worse, actually, as the governments and their central banks offer trillions of perverse incentives for banks to act in ways that are most unsafe.

Ultra-low interest rates provide both the means and the motive to take risk. The means is that leverage is cheap. The motive is that profit margins are compressed, and banks cannot survive without leverage.

So the banks respond to these perverse incentives by taking perverse trades. And this causes all sorts of problems. The kinds of problems that lead to the 2008 global financial crisis.

And governments respond to this by imposing what they call “macro prudential regulation.” They don’t remove the perverse incentives. No, that is a matter of policy (and inexorable necessity of irredeemable currency). Instead, they think to compensate for it by controlling what banks can do.

Compensation is doing the wrong thing, on purpose. Purportedly to address something else, that you cannot or will not properly correct. Like letting the air out of the other three tires, when you have a flat.

Or imposing macro prudential regulation, when you have a failing regime of irredeemable paper and a pathological falling interest rate that both makes it possible, and necessary, for banks to take risks such as extreme leverage, extreme duration mismatch, and chasing risk to obtain a few basis points of yield.

Does macro prudential regulation make the banks safer? Does someone pawing your toothbrush with the same gloves that just touched the previous passenger’s dirty underwear make you safer?

Does a life jacket make you safer working in 10 inches of water? “Don’t argue. Safety first.”

Basel III makes the financial system safer more compliant by forcing the banks to use so-called “stable” funding sources for their gold assets. Instead of interbank lending, or demand deposits, they are supposed to sell more long-term bonds (or even equity).

Like wearing all the mandatory personal protective equipment may load you down, and make it harder to see, hear, and breathe… using more expensive capital to finance gold makes it more difficult to clear gold market transactions.

The above addresses the mainstream idea of banking system risk and safety. However, many gold commentators make a different error. Michael Crichton, in discussing the Gell-Mann Amnesia Effect says the newspaper is full of headlines blaring “wet roads cause rain.”

Some gold commentators claim that Basel III only affects when banks hold so-called “unallocated” or “paper” gold. Worse, are those who say it labels gold a “tier 1 asset.”

Tier 1 applies to the liabilities side of the balance sheet, not the assets side. Tier 1 Capital refers to the stability of the bank’s funding, not the price risk of the asset. Tier 1 capital includes equity from sale of shares, as well as retained earnings. Calling gold a “tier 1 asset” is not even wrong.

If you force a business to add another useless ingredient, it adds cost and the business will try to raise its prices to preserve its margins. In the case of bullion banks, this means wider bid-ask spreads (and also higher interest rates charged for gold leases and loans).

On Friday the UK regulator, the Bank of England’s Prudential Regulatory Authority, gave banks a slight reprieve. It said that banks can apply for a special permission to reduce the required expensive capital reserved for gold. At least for clearing.

However, the regulator said that it would “not classify gold as a high-quality liquid asset.” This means that the banks still face higher costs for leasing and lending.

We have a stunning graph to share. This is a five-year chart of the bid-ask spread in both gold and silver. This spread is how much you would lose if you bought and immediately sold without the market moving either up or down. 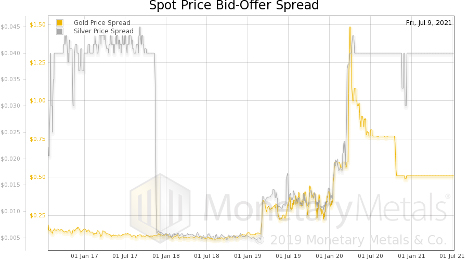 The bid-ask spread for gold was stable for nearly three years, at around $0.15 per ounce. This is extraordinary, by the way, as a percentage of the price of the asset.

Then, it launches like a skyrocket. We documented that it hit $25, on March 25 2020. It began to come down, as the precious metals logistics industry started to figure out how to operate under lockdown measures. By June, it was down to a mere 80 cents. Then, in October, 50 cents. Which is more than triple what it had been for years, by the way.

It has held steady at this quite-elevated level, but compared to the recent past, half a buck is downright tight.

Is Basel III’s higher “Net Stable Funding Ratio” to blame? We don’t know for sure. But it is logical that the new cost-increasing regulations would have an effect. Plus perhaps some lingering lockdown whiplash.

Here is the only chart of the true fundamentals of gold supply and demand. 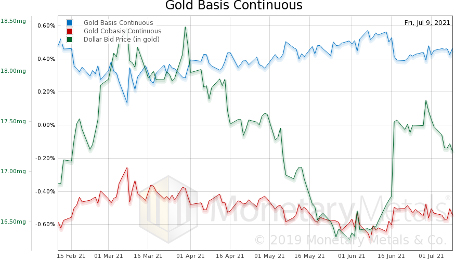 You can see the (relatively) big decrease in abundance (i.e. basis, the blue line) and increase in scarcity (cobasis) when the price of the dollar moves up sharply from around 16.5 milligrams gold to 17.5mg (inverse to the drop in the price of gold, measured in dollars as most people think of it).

As the price of the dollar has fallen, the basis and cobasis are moving back to where they had been. In other words, this is just leveraged speculators positioning and repositioning themselves.

Here is the silver chart. 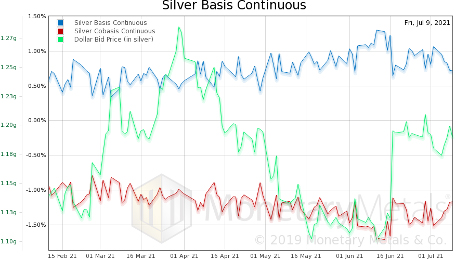 The silver chart basically shows the same thing as gold, with more noise. The price has not moved back to its prior level, and neither has the basis or cobasis.

Could price and basis return to their early-June levels? We must wait and see.