Gold & Silver: Your Lifeboat in the Perfect Inflationary Storm

Let's get the premise of this essay out of the way right now.

I don't believe that the inflation we're seeing – especially in the U.S. – is in FedSpeak, "transitory." The indications and real-world price-increase in so many things I want to buy, if they're in stock, are growing, and unlikely to go back down anytime soon.

Made worse and more complex due to Covid, some parts of the economy are advancing while others, such as labor participation rates, lag.

Sure, there are pockets of deflation due to the acceptance of decentralized finance, and the continued build out in online shopping, but the under-appreciated monster in the room for the foreseeable future is inflation.

As an investor in the 1970s, I've seen this movie before. It's when the term "stagflation" was coined.

We experienced uneven economic progress, mismanaged monetary policy, and socio-political unrest. The eventual response to these issues was an explosion in the price of gold, silver and what was at the time a "hard" and respected currency, the Swiss Franc.

Right now, we are well on the way toward this same kind of circumstance in the metals, for the same reasons, but also for some new and even more profound ones.

Over the next few years, possibly stretching to decade's end – or beyond, we're going to see stagflation's return – on steroids.

How bad it gets is anyone's guess, but if you decide to sit this one out, due to fear, ignorance or naive trust in "the government," you may not just end up behind the curve financially, you could get swept away by it. What's different now:

On the supply side:

By letting inflation run wild, one risks an engine failure, irrespective of the tools used. But acting straight away on the rates would have an even more devastating effect on the system as a whole; and the central bankers are well aware of this.

This is the impasse that the central banks have now got themselves into, in their interventionist policies. Acting straight away will break the engine, while doing nothing will result in a malfunction. That’s what the math is telling us.

Venezuela has announced its dropping six zeros from the currency. The new 100 bolivar bill, equivalent to 100,000,000 of the current one will be its largest denomination.

This is its third adjustment. The first, under Hugo Chavez, dropped three zeros; the second in 2018 eliminated five.

As a general historical statement, virtually any fiat (unbacked) currency is a zero proposition. In due time all will (and all have) seen their original purchasing power drop to zero – and in the case of the bolivar (or the Argentine peso) less than zero.

It may be a stretch to expect the US dollar's trajectory to mimic the "Fuerte" (strong!) bolivar. But it can still crush the purchasing power of the average American without doing anything close. And in fact it already has.

Just since 1980, the dollar has lost over 80%. The best-case scenario today is that a $100 bill then will buy you about $15 worth of merchandise or services now. Going back further and in relation to gold's trajectory, the situation is absolutely abysmal.

John Rubino and James Turk recently posted this visual (see below) comparing what it took in dollars to purchase a one-ounce gold coin in 1933, compared to doing the same in 2020.

The upshot: gold has protected its owners’ purchasing power while the dollar has been depreciated to oblivion. That is the definition of “inflation hedge. 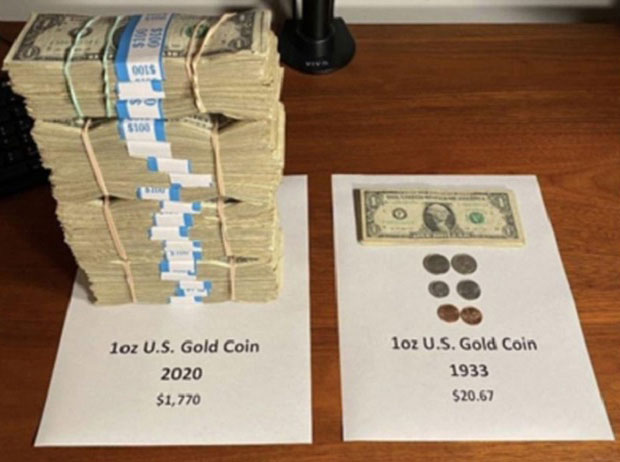 For the foreseeable future, in spite of temporary "down-ticks" in the inflationary picture, the trend now being established points to an inflationary scenario that will be much higher, more pervasive and more enduring (we don't seem to have a Paul Volcker as Fed Chair now) than what prevailed in the 1970s.

Another data point: The Producer Price Index (PPI), a must-watch index of the selling price domestic producers get for what they market, shows a 7.8% year on year increase for July.

Ignore these gathering and rapidly coalescing inflationary storm clouds at your considerable financial peril. Even those with great wealth may find themselves hobbled in the near future if they fail to act decisively.

For the rest of us, an inhibition to acquire and store physical gold and silver as insurance – not in unallocated accounts, but "in hand" – could be as devastating to our wealth and living standards in its own way as what Venezuelans, Argentines, Mexicans, Turks, Lebanese and many other peoples are going through right now.

Don't be caught "standing by" when the purchase price of the dollars in your pocket starts "doing a bolivar." Begin acquiring, then adding to in relation to your plan, and securely holding gold and silver... now!