Is America becoming a nation of gamblers?

The lure of potential cash windfalls is driving rampant speculation in financial markets and record traffic to casinos.

The commercial gaming industry generated a record $13.6 billion in revenues during the second quarter, according to the Las Vegas Review-Journal. Casinos in Las Vegas, Massachusetts, Louisiana, and elsewhere now expect 2021 to be their best year ever.

On the flip side, since all games on a casino floor are rigged in favor of the house, it’s a good bet that gamblers are losing record amounts of money.

They’d have better odds throwing their cash haphazardly at financial markets, where the rigging is less blatant.

That’s not to suggest that it’s prudent to put your financial future on the line in any casino, whether operating in Las Vegas or on Wall Street. A sound investing strategy won’t necessarily bring you jackpot gains, but it will protect you from disastrous losses.

In an era of unsound money and Federal Reserve bailout stimulus, the lines between investing, speculating, and gambling are getting blurred. No doubt, many people believe that “HODLing” crypto tokens on their smartphone apps makes them savvy investors.

In reality, the only people who are generating steady cashflow every day from crypto trading are the brokerages and exchanges who take a cut of the action. According to the Wall Street Journal, Robinhood charged customers $233 million in fees for routing cryptocurrency trades – with most of the volume occurring in Dogecoin.

Profits will be won and lost by players in the game of trading digital assets, but the house wins regardless. 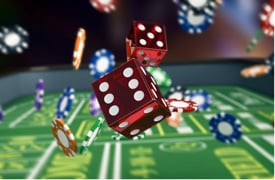 Casino gamblers who want to give as little back to the house as possible choose bets with the lowest house edge. It can vary from as high as 15% on some slot machines and side bets at table games to as low as 1% on blackjack, baccarat, and certain video poker machines when played with a proper strategy.

Wall Street employs management fees, commissions, “routing” costs (often hidden), and bid/ask spreads to generate revenue at the expense of investors. Futures exchanges can be even more opaque and predatory, with large institutional traders manipulating markets to their advantage.

Last week, a federal judge ruled that four former JPMorgan Chase employees will have to face racketeering and other charges related to their alleged manipulation of precious metals futures contracts. They are accused of putting in fake orders (“spoofing”) to cheat other traders in gold, silver, platinum, and palladium markets.

JPMorgan has already agreed to pay more than $920 million to settle spoofing probes by the Department of Justice and Commodity Futures Trading Commission.

With some games, it’s simply best not to play. The majority of individual speculators who try to play in leveraged derivatives markets controlled by large institutions, not surprisingly, end up losing.

Obscure and “collectible” coins, by contrast, typically entail large costs paid to the dealers who peddle them.

Overcoming the house edge on numismatic products can require a massive amount of market appreciation over time – and even then, the actual realizable gains would likely be less than on low-premium bullion products that would have appreciated closely in accord with spot prices.

Putting your money to work in cost-efficient investment vehicles is key to long-term success. Also key is knowing when to hold, when to fold, and when to double down.

At the casino, some gamblers employ a Martingale betting system which requires them to double their bets after each loss until they show a win. It works provided long losing streaks can be avoided. But when it fails, it fails spectacularly – potentially wiping out the gambler’s entire bankroll.

Fortunately for investors in physical precious metals, losses are never that dramatic.

Gold and silver prices will never go to zero like losing bets can. But they certainly can be streaky.

Some investors try to take advantage of winning streaks by employing positive progression – adding to positions after they go up in price. The advantage is that they’re using profits (i.e., the house’s money) to build on and amplify gains.

The disadvantage to positive progression is that it risks having the investor take out the biggest stake at a market top.

With negative progression, buyers add ounces of precious metals on price drops. The advantage is that investors are pursuing value and setting themselves up to take out their biggest stake at a market low.

The disadvantage to negative progression is that prices may continue falling after the investor goes “all-in.”

Or prices may never drop from an initial purchase, thus never giving the investor the chance to take out a full position. 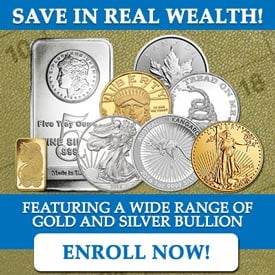 Price movements are impossible to predict with any regularity. Given that, investors can protect themselves from the risks of being on the wrong side of up, down, or sideways markets by simply adding to their positions on a regular basis, regardless of price, in accord with their long-term objectives.

This strategy is also known as dollar-cost averaging. And Money Metals’ Monthly Savings Plan makes it easy for bullion investors to implement. Just Choose the monthly dollar amount you wish to invest (as little as $100) or a monthly number of ounces you want to buy.

By exchanging depreciating U.S. fiat currency for sound money on a regular basis, you’ll have good odds of coming out ahead over time in terms of purchasing power.