The gold market is flirting with a breakout to the upside. Prices have rallied more than $100 since putting in a seasonal low in August. 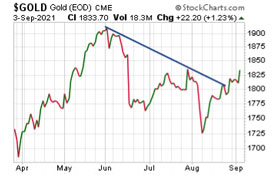 More importantly, gold has shown signs of strength and is acting like it wants to break through this summer’s technical congestion to potentially make a run at $1,900/oz in the weeks ahead.

A major gold rally could signal trouble for financial markets.

They have managed to avoid any significant problems this year after a turbulent 2020.

But as valuations become stretched while inflation runs hot and economic conditions deteriorate and, risks are on the rise for holders of U.S. stocks and bonds.

Friday’s employment report showed jobs growth coming up short of expectations at the same time as wages are rising at a better than 4% clip.

The kind of scenario where hiring slows while wage hikes and other inflation pressures persist is a symptom of stagflation – a very difficult environment in which to invest in conventional financial assets.

Gross retired as manager of the world’s biggest bond fund in 2019, so he is now free to pontificate without concern as to whether his words upset regulators or institutional investors.

“Cash has been trash for a long time, but there are now new contenders,” Gross wrote. “Intermediate to long-term bond funds are in that trash receptacle for sure, but will stocks follow? Earnings growth had better be double-digit-plus or else they could join the garbage truck.”

Gross sees inflation, coupled with waning demand for Treasuries by foreign central banks, forcing bond yields to rise. That, in turn, could cause equities to be repriced for a more a difficult earnings environment.

If even Treasuries and blue-chip stocks fall toward “junk” status, and cash remains trash, then how can investors prevent their portfolios from going into the dumpster?

One obvious thing they can do is load up on alternative asset classes, including physical precious metals. They might even consider an entirely different kind of “junk” that is anything but garbage.

These formerly circulated dimes, quarters, and half-dollars may show a bit of wear and tear. But their silver content is just as valuable as the silver used in newly minted bullion products.

“Junk” coinage is one of the most cost-effective ways to accumulate physical metal.

It’s also one of the handiest for those who prefer to have some unit sizes that are smaller than full-ounce coins.

Bargain hunters may also be able to get great pricing on gold coins, rounds, or bars that have been scratched or dinged.

Regardless of which forms and sizes of bullion you prefer to own, anytime you convert U.S. currency into hard money, you’re effectively turning trash into treasure.