Credit risk out of China and debt ceiling drama in Washington are driving precious metals markets this week. Gold and silver attracted some significant safe-haven buying as equity markets succumbed to selling.

The storyline being trumpeted in the financial media is that a government shutdown and possible debt default loom in October unless the U.S. Senate comes to an agreement on raising the debt ceiling.

There is some truth to these headlines. And we would certainly include unsustainable government debt among the top reasons for investors to own physical precious metals.

But let’s get real. The odds of an actual default on U.S. government bonds in 2021 are slim to none.

Like so many times before, brinksmanship will almost certainly give way to compromise. The debt ceiling will be raised one way or another.

Right now, what we are witnessing is mostly political theater.

The reality is that establishment Republicans approved most of the spending that is now being financed. And Democrat Leader Chuck Schumer could authorize the government to undertake additional borrowing through a procedural vote in the Senate at any time.

“Democrats have the votes to do it on their own,” left-leaning CNN acknowledged.

But by doing so, “they would be getting all the worst parts of raising or suspending the debt ceiling with none of the benefits.”

By “benefits,” they mean political cover for vulnerable Democrats in the mid-term election campaign.

Meanwhile, CBS News is reporting that a “U.S. debt default could wipe out 6 million jobs and $15 trillion in wealth” based on calculations by Moody's Analytics.

Janet Yellen is warning of an “economic catastrophe” in the event that Congress fails to raise the government’s credit card limit. 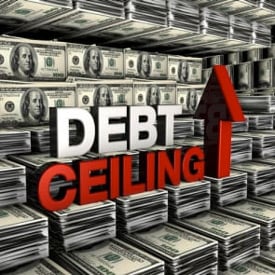 These alarmist warnings are misleading. Government bonds and the dollars in which they are denominated are claims on wealth – not wealth itself.

In a sovereign debt collapse, purchasing power is transferred away from bondholders to the benefit of taxpayers who are no longer on the hook for paying interest and principal.

Of course, a domino effect would hit financial markets and sectors of the economy sensitive to credit risk. The financial system would be forced to reorganize itself on sounder footing – a painful process which wouldn’t necessarily be a bad thing in the long run.

But a default won’t be allowed to happen.

Even if the Senate fails to act, the Treasury Department and Federal Reserve could invoke emergency measures on their own.

Some unconventional options being discussed involve precious metals – though not in the sense of returning to sound money.

One proposal would have the Treasury Department mint platinum coins with an arbitrary face value of $1 trillion. These coins could then be deposited at the Federal Reserve, which would credit the government with the trillions of dollars it needs to pay its bills.

As wacky as this idea sounds, it was first floated by hard leftists during the Obama administration as a way around political gridlock over the debt ceiling, and it is again being pushed as a possible last-ditch maneuver.

Of course, individuals who hold platinum American Eagle coins (face value $100) wouldn’t become instant trillionaires. But platinum and other hard assets could still move markedly higher in dollar terms based on inflationary fears if the Fed used its digital printing press to buy coins the U.S. government declares are worth a trillion dollars.

Regardless of what form it takes, the Fed stands ready to print all the currency the government needs to pay its bills.

Former Fed chair Alan Greenspan has said that a default is essentially impossible under our monetary system.

Instead of fearing a formal U.S. default, investors should fear the inflationary consequences of averting it. A lot of new currency creation will be coming down the pike in the years ahead to keep the $28.8 trillion (and growing) national debt propped up while enabling politicians to continue running multi-trillion-dollar annual budget deficits.

The greatest default risk of all is that of the Federal Reserve reneging on its obligation to maintain a stable currency.

With no meaningful grounding anymore in gold or other precious metals, there is nothing to stand in the way of a precipitous decline in the Federal Reserve Note's value – especially since a currency devaluation is more convenient for politicians than balancing the budget.