Gold finished solidly above the $1,800/oz level on Friday, marking the yellow metal’s best weekly close since late August. More importantly, gold may be breaking out of a larger consolidation pattern that has been in force since prices peaked in August of last year.

Prices edged above the descending triangle line – although perhaps not convincingly so. 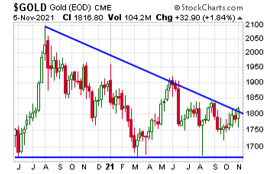 If the breakout is real, then we should see a follow-through advance this week to confirm it.

Interpreting chart patterns is more of an art than a science. Any given technical setup, whether bullish or bearish in appearance, can fail.

Traders who lack conviction in the underlying fundamental case for gold will bail out of their positions the moment they read something bearish into the price action. They may get lucky with some trades, but they likely will never realize the massive gains that come from holding through the duration of a major bull market.

Fortunately, the fundamental reasons to invest in precious metals at this time – with stagflation likely looming in 2022 and beyond – are compelling.

Gold and silver in particular are uniquely well-situated to benefit from a potential currency crisis.

Gold and silver are forms of hard money. No other commodity or collectible serves that unique function.

That’s important to keep in mind when investing not just for inflation, but also for the potential of a severe downturn in the economy or loss of confidence in the U.S. dollar.

Most investments related to hard assets, including base metals, energy, and real estate, are economically sensitive – meaning they tend to get pulled down when the economy and stock market head south.

Gold shows virtually no correlation with the business cycle and can sometimes move in the opposite direction of conventional asset markets.

It has underperformed stocks as well as many other types of hard assets year to date. Frustrating though that may be for gold bulls, the divergence isn’t anything for long-term holders to worry about.

It represents an opportunity to switch out of assets that have appreciated substantially and into precious metals which are relatively undervalued.

The pendulum of investor sentiment will inevitably, eventually, swing away from the stock market and its sky-high valuations. It will in time swing toward safe havens, toward hard assets, and ultimately toward hard money.