Gold Holding Up as Cryptos Get Hammered

As Bitcoin made new all-time highs in recent weeks, an increasing number of investors referred to it as the “new gold.”

Sure, Bitcoin and other digital currencies may have some of the same potential benefits as gold, being alternative stores of value that exist outside the banking system. Cryptos are a far cry from hard money, however, and recent price action may be indicative of why. 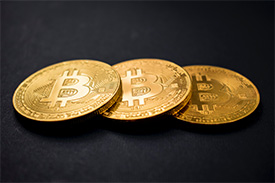 Now that Bitcoin has put together a slight rebound, speculators may be wondering if it is safe to jump back in.

The answer to that question is that crypto markets are inherently speculative.

While they likely still have significant upside potential, they also carry unlimited downside risk since they lack any sort of tangible utility that could provide a fundamental floor for demand.

Hard assets including gold will retain value over time regardless of which direction speculators may push or pull prices in the near term. Although the yellow metal has been beaten down over the past few weeks, its declines were nothing like those seen in Bitcoin.

This begs the question of why Bitcoin might fall so precipitously while gold is able to hold its own.

Gold has been used as money for thousands of years. The yellow metal has been considered a reliable store of wealth and protector of value for centuries. Treasured by kings and servants alike, gold is valued all over the world and speaks a common monetary language to its holders.

This is unlike Bitcoin, which has only been in circulation a few years now and has yet to really prove its reliability under stress.

Despite cryptos’ differences from traditional fiat currencies, they are still effectively unbacked assets.

Owning Bitcoin does not put anything in your hand. While cryptocurrency can be exchanged directly for something tangible at a retailer that chooses to accept it, most crypto holders simply hold (or “hodl”) in hopes of appreciation.

Were people to stop expecting Bitcoin to appreciate, then there may no longer be any compelling case for holding it and possibly little market left for it.

Despite what many Bitcoin enthusiasts may tell you, cryptos may also be seized, controlled, or even co-opted by the government if it should decide to do so. This makes cryptos vulnerable to rising political risk as broke, revenue-hungry governments become increasingly rapacious.

Gold and cryptos are unlikely to share a similar market path as the differences between them become more widely acknowledged and visible. While Bitcoin may offer tremendous short-term profit potential, it can be a roller coaster to ride and can shake the nerves of even the most fearless investors.

Gold, on the other hand, is unlikely to experience the extreme price swings of Bitcoin.

The relative smoothness of gold may make it a more viable portfolio diversifier for those looking to protect their wealth and hedge against rising inflation.

After all, isn’t the whole purpose of holding an inflation and economic hedge to eliminate much of the potential risks inherent in other asset classes? It is for this reason that precious metals are likely at some point in the economic cycle to outperform cryptos.

The extreme volatility exhibited by cryptocurrencies renders them unsuitable for the more conservative investor.