More and more Americans aren’t buying the Wall Street fairy tale, no matter how heavily it is promoted.

Consumer prices are rising at the fastest pace in 40 years. The official report for November showed an increase of 0.8% versus October (9.6% annualized) and 6.8% over the past twelve months. 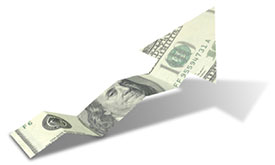 Worst of all for the politicians and bureaucrats currently running the nation is that Americans are taking notice and assigning blame.

The Federal Reserve spent the past dozen years creating massive inflation via an endless series of “extraordinary measures,” including zero interest rates and debt monetization.

COVID lockdowns, vaccine mandates, and lavish unemployment benefits sponsored by state and federal governments all contributed to labor shortages which pushed wages and prices higher and reduced the supply of goods and services.

The Biden administration canceled the Keystone oil pipeline and is considering shuttering another, contributing to higher oil prices.

Their fingerprints are all over the rising inflation now leaking out of Wall Street and the housing market and into the rest of the economy.

The ongoing inflation is not just a political liability. It is also an embarrassment to officials like Jerome Powell who has stood out front for most of the year making his truly ridiculous claim that inflation is “transitory.”

It was brazen for Powell to make such a claim, especially as he heads the central banking cartel directly responsible for the 108-year, nearly uninterrupted, decline of our currency’s purchasing power.

The coming year brings the midterm elections. The popularity of the White House resident is in steady decline. If Democrats get blamed for a faltering economy and dramatically higher living expenses, even wide scale election rigging would be unlikely to avert a bloodbath at the polls.

The administration doesn’t want Americans talking about rising prices or voting their displeasure.

Last week, Bureau of Labor Statistics officials trotted out a new inflation-reporting gimmick. They will adjust the formula for measuring CPI.

The two-sentence announcement simply states the index will use consumer expenditure data from 2019-2020. There isn’t enough detail to know exactly what this means, but it looks like an effort to raise the baseline numbers and thereby moderate reported price increases.

Americans will know for sure the fix is in when the headline CPI numbers begin to decline and the financial press starts cheering Biden and the Fed for conquering the inflation dragon.

It is just the solution Americans should expect given the times. Bureaucrats will do nothing to actually shore up the Federal Reserve Note “dollar.” They will rely instead on phony statistics and a coordinated PR campaign.

To be fair, this certainly won’t be the first time CPI calculations have been altered to disguise rising prices. Many skeptics anticipated this move.

We doubt the maneuver fools enough voters to matter. What people experience at the grocery store should outweigh any fake news on inflation.