Gold and Silver Will Treat You Well When Viewed as Insurance First, Profit Second

Right out of the box this year, gold, silver, and mining stocks were extremely volatile. One day gold rose $25 an ounce and silver a dollar. Next gold dropped $35 and silver $1.20.

Is it worth holding metal and putting up with such dysfunctional price gyrations? My answer is an unequivocal "Yes"!

One of The Morgan Report's long-time colleagues, US Global Investors' Frank Holmes, in his column "Frank Talk," writes that India spent a record amount on gold in 2021 ($55.7 billion) surpassing the $54 billion record set in 2011.

"Weak-handed" investors are emotionally swayed by the daily price swing "noise" -0 which is more often the result of paper "chart painting" than fundamentals.

It's easy to become discouraged and postpone a rational physical gold – silver strategic acquisition plan for yourself and your loved ones. This U.S. Global chart should help assure you that over the long run (and in the intermediate term too) "sticking with the plan" is a solid gold approach. 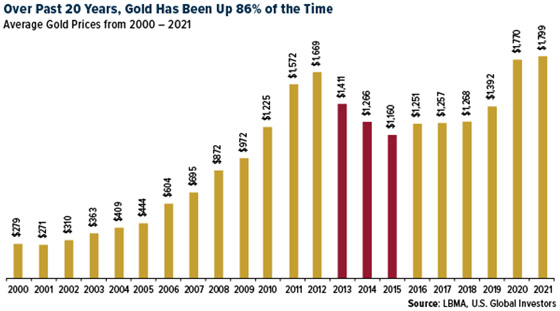 The World Gold Council reports that the third most liquid asset after the S&P 500 and U.S. Treasuries is gold. When held yourself or in allocated form, no one else but you has a claim to it.

Add that contrary to the public's perception – it has surprisingly low volatility over time – and you've got a winning hand.

Doug Casey is the doyen of investment letter writers. His book, Crisis Investing: Opportunities and Profits in the Coming Great Depression (1980) is considered a classic in the genre.

In the 1970's, along with Harry Browne, Jerome Smith and Jim Sinclair ("Mr. Gold"), Casey sounded the alarm on a decade that came to be known for slow growth and high inflation – "stagflation" – leading to a massive gold and silver bull market which peaked in 1980 at $850 and $50, respectively.

The background is recounted here because the 2020's are shaping up as a stagflation mirror image – only this time, by the metrics of Federal debt, socio-political discord, the Covid response, central bank mismanagement, and inflation, things are much worse.

The silver market is only about 1/10th the size of its gold cousin. When investors get concerned about inflation – as they are now – money flooding into the metal's market can cause an energetic impulse leg to get underway posthaste.

David Morgan says that in markets, "change takes place on the margin." With about 15% of silver supply dedicated to investment, that "change" can happen in a heartbeat.

The problem for most of us is that silver can remain deceptively calm for lengthy periods before exploding to the upside. Even experienced traders find themselves doubting the staying power of a new run, as many did in 2016 and 2019. Trying to trade "resistance" lines on the charts, leaves investors on the sidelines as the price deftly slices through them.

It's the most reckless monetary action in the history of the US. Moreover, it has set the stage for an explosion in inflation—notwithstanding any token moves to tighten. I expect it to kick off a crisis-driven mania into silver like what happened in 1980. Adjusted for today’s prices, that could mean silver soaring above $190 an ounce—many multiples of the current price.

Hugo Salinas Price, one of Mexico's wealthiest businessmen, speaks to the wisdom of holding precious metals – as well as the probable outcome from doing so:

At the present time, it is clear that there is only a minimal interest in owning gold on the part of most investors focused on maximizing their ownership of Dollars or Euros.

However, when the King of Fiat – the Dollar – suffers a sudden loss of value in terms of other currencies... at some point, it will dawn upon investors that owning Dollars (and other fiat currencies) is a losing proposition, and they will rush in mass, to acquire whatever they can of the yellow metal.

Official selling to break the price will, at best, only slow its rise, allowing for panicked investors to acquire some gold - but far less than had they not been so blind to the danger. At this point, the price will be rising by hundreds of Dollars an hour...

The motto of holding gold and silver: First as insurance against a decline in your other assets, and only Secondarily for possible investment gains, has never been more relevant than it is today as markets across the board -including the metals – gyrate, on a metaphorical tightrope over an abyss!

After all, if you do get a big win on your metal, you can sell some and diversify into another strong asset like land, collectibles, or food storage… before inflation still further erodes your purchasing power.

Shouldn't you follow the advice of these wise men, and Stake Your Claim to enough gold and silver to fit your circumstance as a Player rather than a "Watcher"?