Conflict with China and Russia Could Accelerate De-Dollarization

Geopolitical tensions are casting a pall over the Olympics in China amid rising fears of war with Russia. As nations prepare for conflict, investors should brace for potential fallout in asset markets.

Both China and Russia play hugely important roles in the global economy. Both face economic sanctions from the United States. And both are eyeing long-term strategies for shifting the locus of global trade away from the Federal Reserve Note “dollar.”

The Biden administration announced a partial diplomatic boycott of the Beijing Olympics.

It also recently imposed trade restrictions on 34 Chinese entities for supplying the Chinese Communist Party with tools to commit “crimes against humanity.”

Although China now stands accused on the world stage of committing human rights violations against Uyghurs, the CCP has never faced much official condemnation for its role in unleashing the COVID-19 pandemic and covering up its origins.

By contrast, U.S. officials eagerly find reasons to condemn and punish Russia for its transgressions. Some in the Pentagon are warning that Russia is on the verge of invading Ukraine and instigating a war that could claim thousands of lives and scatter millions of refugees.

Perhaps it will prove to be a baseless Russia conspiracy theory borne out of faulty intelligence. Perhaps not.

In any event, the Biden administration is weighing possible new sanctions on top of the ones that have already taken a toll on Russia’s economy.

They don’t seem to have deterred Russian President Vladimir Putin, however. He continues to push against the U.S. and its NATO allies.

U.S. Can Strike at Any Nation’s Financial Infrastructure

Michael S. Bernstam of the Hoover Institution suggests U.S. sanctions take a different approach: “The threat of devastating Western financial, trade and personal sanctions is credible but may not constitute sufficient deterrent. The threat of a Western military response could present a deterrent but is not credible,” he writes.

“One deterrence measure is both credible and sufficient. It is the threat to sanction the Russian Central Bank.”

Russia’s central bank, like most around the world, holds significant U.S. dollar reserves. Mostly they are in the form of electronic entries at the Federal Reserve.

The Fed, along with the European Central Bank, could lock Russia out of those assets, suggests Bernstam. America’s use of its financial weaponry in this way would potentially be ruinous for Russia’s currency, banking system, and economy. 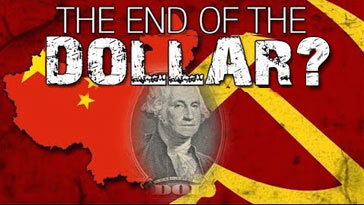 Of course, forcing a sovereign default could also be ruinous for the remaining trust and credibility of the U.S. dollar as world reserve currency.

In the long run, that could play right into the hands of Russia and China. They are steadily pursuing de-dollarization anyway.

One tool for gaining greater independence from the global fiat monetary order is gold.

Countries Are Bolstering Their Gold Reserves to Increase Independence

Since 2014, Russia’s central bank has been switching out Federal Reserve Notes for gold. According to the latest reports, the Bank of Russia now holds more of its foreign reserves in gold (23%) than in dollars (22%).

Russia also happens to be a key player in the global palladium market, possessing significant stockpiles and controlling nearly 40% of all production for the scarce metal used in auto catalysts.

Russia also supplies the European Union with about 35% of its natural gas.

Meanwhile, China dominates the market for rare earth metals which are essential in many industrial and high-tech applications in the United States and elsewhere.

With price inflation now raging, the risk of resource wars is rising. When things are going badly in the economy and for the incumbent party in government, scapegoating and warmongering often take the place of accountability.

Peace advocates hope the latest flare up involving Russia recedes as cooler heads prevail. At the end of the day, nobody wants to start World War III.

Geopolitical events tend to be short-lived in terms of their capacity to move markets. Investors who try to trade based off global conflict reports tend to get burned.

Individuals and Businesses Can De-Dollarize Too

The case for diversifying into hard assets doesn’t rest on global strife driving shortages. It rests on inflation continuing to persist as a consequence of the Fed’s loose monetary policies.

Supply disruptions and chronic under-investment in the mining industry are also pressuring raw materials markets. Spot shortages in aluminum, copper, steel, precious metals, and rare earths are likely to appear in the months ahead.

Supply shortfalls could, of course, be exacerbated by a new cold war or hot war overseas.

Investors who are concerned about both geopolitical and inflation risk would be wise to de-dollarize their own portfolios.

Replacing paper assets with physical precious metals in prudent allocations can help insulate wealth from a variety of threats that now exist as well as from those we can’t yet see.