As the world nervously awaits the next development in nuclear-armed Russia’s standoff with Ukraine, a different headline-grabbing standoff may be even more consequential for investors. 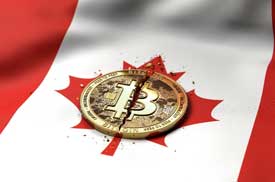 In response, Canadian Prime Minister Justin Trudeau’s government has decided to get even more draconian.

Last week, Trudeau invoked emergency powers to target the finances of the truckers and their backers.

In an unprecedented move sidestepping normal due process guarantees, Trudeau ordered banks, insurance companies, and even cryptocurrency exchanges to close the accounts of anyone deemed to be involved in the Freedom Convoy.

Similar trucker-led protests are scheduled to begin this week in Washington, D.C. ahead of President Joe Biden’s March 1st State of the Union address. In response, the administration has ordered security fencing to be installed around the Capitol building.

Silver guru David Morgan believes so. In a video posted over the weekend, he said, “What Canada is doing… is really a precursor for what the global elite is planning to do planet-wide.”

One of their major objectives is to move toward a global digital currency regime that will make it easier for governments to tax, confiscate, and redistribute wealth.

Driving out physical cash from the economy will also enable banks to amass more control over financial transactions – and possibly put customers at greater risk of being shut out of the economy (or forced into it).

David Morgan warns that the next financial crisis will bring bank bail-ins – whereby some assets of depositors are claimed by banks to prevent cascading failures.

Given the growing risks to wealth holders, sound asset protection strategies are a must.

Accounts held at banks and other financial institutions are vulnerable to being restricted or cancelled for any number of arbitrary reasons. Even cryptocurrency wallets can be seized by governments, with Canada showing the way.

Interestingly, though, the Trudeau regime hasn’t tried to seize physical precious metals from enemies of the state.

It’s just not practical for a government to try to find out who owns gold and silver coins and where they might be kept. It’s far more efficient to seize assets that are held digitally or in financial institutions.

Gold and silver bullion should never be held via an account at a bank or brokerage firm. Bank safe-deposit boxes are also poor options for storing precious metals (many banks expressly prohibit gold or cash contents).

In order for a precious metals holding to fully protect against political and financial threats, it should be physically segregated from the financial system.

That means your bullion should be stored in a secure hiding place at home or through a private vault service such as Money Metals Depository.