As Russia initiates military action in Ukraine, pain at the pump is about to get even worse.

Fuel costs have already been soaring due to oil and gas supply constraints coupled with broader inflationary pressures. The national average for a gallon of regular unleaded is $3.55 – up 75 cents from a year ago. Some parts of the country are paying closer to $5.00 per gallon. 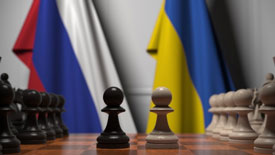 Now the threat of full-scale war in Ukraine is sending risk premiums in futures markets even higher. Crude oil futures jumped to over $100 per barrel ahead of the U.S. market open on Thursday morning.

A new round of sanctions by the United States and its allies against Russia may end up costing U.S. consumers as much as Russian President Vladimir Putin. Russia is the world's third largest oil producer and a leading supplier of natural gas to Europe.

President Joe Biden stated that the administration is “closely monitoring energy supplies for any disruption.” He claims to have a plan to secure energy market stability and limit gasoline price increases.

But analysts including Energy Word founder Dan Dicker see higher prices ahead. He warns that summer driving season could see gas prices shooting up to $6.50-$7.00 per gallon.

Other markets that could shoot higher include grains, base metals, and precious metals.

Stocks, meanwhile, are breaking down. The major averages could be heading into a bear market as the economy struggles with surging inflation.

According to DataTrek Research, the last five recessions were each preceded by a run-up in crude prices of at least a 90%. Oil prices have now more than doubled since the beginning of 2021.

A few days ago, expectations were that surging inflation would prompt the Federal Reserve to hike rates by a 50 basis points at its March meeting.

But now that the world has entered into a geopolitical crisis and the U.S. stock market suddenly appears vulnerable to crashing, all bets are off as to what the Fed’s next move will be.

The Fed has an official mandate to pursue “stable prices.” But whenever that conflicts with its unofficial mandates to support the stock market and rubber-stamp government initiatives, fighting inflation tends to take a back seat.

Central bankers were already way behind the curve when it comes to interest rate hikes. The gap between the inflation rate (7.5% based on the Consumer Price Index; higher by alternative measures) and the nominal Fed funds rate (near zero) has never been greater.

Deeply negative real rates could combine with the latest geopolitical shock to global energy markets to create something of a perfect storm for gold and silver.

Physical precious metals are, in a very real sense, a form of stored energy. It takes an immense amount of energy to mine ore from the earth and refine it into lustrous gold and silver coins you can hold in your hand. That energy, in turn, is reflected in the intrinsic value of bullion coins.

During turbulent and uncertain times, tangible wealth provides a measure of security that no paper or digital representation of value can.

Precious metals dealers are bracing for a possible spike in buying. Bullion demand had already been running strong over the past two years. Today the reasons for investors to diversify into hard money are even more pressing.

Precious metals dealers are bracing for a possible spike in buying. Bullion demand had already been running strong over the past two years. Today the reasons for investors to diversify into hard money are even more pressing.

A major surge in safe-haven demand from investors who had previously been on the sidelines could be the catalyst for an epic run-up in metals markets. Even if conflict with Russia deescalates and risk premiums contract, the Biden administration and Federal Reserve will continue waging a longer-term war on the purchasing power of the currency – pressuring gold and silver prices higher over time.