After rallying over the $2,000/oz milestone this morning, the gold market may now be poised to run to new record highs. 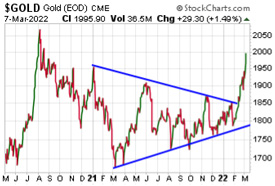 A major technical breakout out of last year’s consolidation pattern had already been established in February.

A trend change of this significance can be expected to last not days or weeks, but months… perhaps years.

Of course, there will be pullbacks along the way. Some could even be severe – especially if timed around geopolitical events or Federal Reserve pronouncements. But the forces driving gold and silver prices higher assuredly aren’t transitory!

Precious metals are gaining on inflation fears, which are being exacerbated by war. Unprecedented economic sanctions imposed on Russia threaten to cause currency turmoil and global disruptions in supplies of critical commodities.

Regardless of price spikes induced by geopolitics, inflation will continue pressuring hard assets markets higher over time in terms of depreciating U.S. dollars.

The Russia factor is more difficult to gauge. The geographically expansive country is a major producer of energy and agricultural commodities for Europe, China, and beyond.

It is also a key player in precious metals markets – controlling 40% of global palladium production.

The longer the war in Ukraine persists, the more likely we are to see growing food and energy shortages.

The recent price spikes in crude oil, wheat, and other commodities could have much further to go.

Likewise, precious metals markets’ breakout may be just the beginning of a much more powerful move.

In a worst-case scenario, nuclear war breaks out and all markets get plunged into chaos. BCA Research global chief strategist Peter Berezin estimates the risk of nuclear Armageddon to be 10% – still unlikely but disturbingly high compared to 0%.

The sanctions previously imposed on Russia over the past few years by the United States and its allies have certainly failed if their goal was to deter Russian President Vladimir Putin from invading Ukraine.

The West’s campaign to choke Russia off economically – the financial equivalent of invoking the nuclear option – could put Putin in a place where he sees no way out other than to lash out militarily.

Russia sits on over $600 billion in currency and gold reserves. The financial blockades imposed by governments and the large-scale boycotts of led by some the world’s largest corporations have even extended to Russian-refined bullion bars.

The London Bullion Market Association, which sets the rules for the global gold trade, has knocked all Russian gold and silver refineries off its accredited “good delivery” list.

In response, Russia’s central bank is expected to ramp up purchases of domestically produced gold and silver. There will be that much less supply available to provide liquidity in the global retail bullion market, raising the odds of higher premiums and shortages of some types of products.

If nuclear war breaks out, gold and silver may become widely unavailable at any price.

In a best-case scenario, though, a cease-fire agreement is reached with Russia, Putin stands down or steps down, and global trade constraints lift. Any de-escalation could, at least temporarily, tamp down the fear trade and cause some of the risk premiums behind surging oil and gold prices to recede.

Even if world peace breaks out, though, investors concerns will quickly shift back to government debt, negative real interest rates, and other drivers of high inflation.

The Fed is in a tough spot. It was already way behind the curve on fighting inflation before the latest commodity price spike.

Ordinarily, larger and more numerous hikes would be the appropriate response from monetary policy. Indeed, those rate hikes were signaled, even as doubts loomed the Fed would or could do anywhere near enough.

But given that there’s a geopolitical crisis, the stock market is tanking, and recession warnings are flashing, Jerome Powell and company are feeling pressure on the dovish side. They may take only a baby step toward tightening at their upcoming policy meeting.

The now-expected quarter-point hike, assuming it goes through, should do nothing to dissuade investors from seeking inflation protection. Negative real yields will remain at negative 6% or more.

During good times, stocks, cryptocurrencies, and various other asset classes can keep investors ahead of general price level increases.

But during bad times, such as now, financial and digital assets are vulnerable. These are the times when physical precious metals shine as indispensable safe havens from monetary, economic, and geopolitical turmoil.