Last week’s release of first quarter GDP data was a disappointment, as GDP sank by 1.4%. Analyst expectations were calling for a rise of 1%.

The surprise decline may signal a recession ahead. Optimists, however, say the GDP number may not be as bad as it looks.

They point to issues including inventories as well as imports and exports. Someone needing to purchase a new stovetop for their kitchen, for example, may have to wait a year to get it due to supply chain constraints. That hurts sales, without a doubt. Imports are up while exports are down, which also affects GDP negatively. 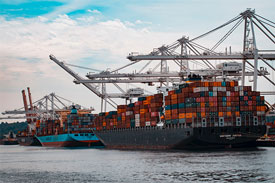 Stocks largely ignored the poor GDP report. The gold market did not show much reaction, either.

Investors may now believe the Fed will continue posturing to fight inflation. Realizing they are so dramatically behind the curve, central bankers are unlikely to change direction in response to a single bad report on the economy, especially when some underlying components of the report were strong.

The Fed feels the economy is still strong enough to absorb higher interest rates. With inflation running completely out of control, the Fed may even act aggressively on raising rates in the next few months.

To that end, the central bank is expected to hike rates this week by 50 rather than 25-basis points – and this could be repeated in the following Fed meetings as well. Markets are expecting 250-basis points of rate hikes over the next 12 months.

The Fed may look to create a “shock and awe” effect and could even raise rates by 75-basis points if it deems necessary to reclaim some of its lost credibility.

But if the stock market suffers a severe breakdown, Fed officials will face pressure to prematurely end their rate-hiking campaign. While stocks have already undergone a correction, they are at risk of crashing if the Fed maintains an aggressive tone.

Once equities really begin to tank, the screaming from politicians and bankers may become too much for the Fed to bear. It’s theoretically possible rates could get as high 3% before the Fed loses its nerve and begins slashes them – as has occurred so many times before.

These scenarios keep gold in a position to run higher, likely to new all-time highs. A breakout above $2,050 in particular would signal a big move to the upside.

Regardless of upcoming Fed rate hikes, real interest rates are now – and will continue to be – way less than zero.

That makes precious metals attractive as alternative forms of cash.