When the Dollar Breaks Down, Metals Will Lift Off

Gold and silver markets continue to be pressured by a relentlessly rising U.S. Dollar Index. Throughout the year, the Federal Reserve Note has been gaining ground against the euro, the yen, and other fiat currencies.

Of course, when measured against real economic goods, the U.S. currency has been losing value at a rapid pace. But futures traders who take their cues from foreign exchange markets have decided to sell precious metals contracts in response to superficial dollar strength. 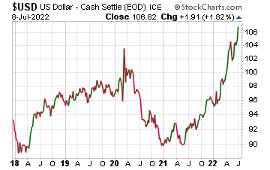 After going essentially straight up for more than a year, the Dollar Index chart is now looking extremely overbought.

The Federal Reserve note may be due for a retracement against its foreign counterparts. That will likely spark a rally in metals markets.

What fundamental drivers could cause the buck to decline?

For one, currency markets may be overestimating the Fed’s willingness to continue tightening monetary policy aggressively.

The U.S. central bank is widely expected to hike its benchmark interest rate another 75 basis points later this month. Anything less would be a blow to dollar bulls.

Since the Fed began hiking, stocks have plunged into a bear market as oil, copper, and other economically sensitive commodities have also plunged. Markets are now pricing in a recession – something that should give Fed policymakers pause.

Any more bad news out capital markets or the economy will lead to calls from high places on Wall Street and in Washington for Jerome Powell and company to pivot away from inflation fighting.

With a mid-term election coming up, the White House surely doesn’t want Republicans to be able to make a “Biden recession” the top issue on voters’ minds.

Meanwhile across the Atlantic, the European Central Banks faces pressure to prevent the euro from falling further.

Europe’s leading economy, Germany, is suffering an energy crisis due to a shortfall of Russia-supplied gas. With electricity and food costs skyrocketing in euro countries, a currency crisis could follow unless officials get serious about shoring up the euro.

The U.S. dollar is ultimately no safe haven from a euro collapse. Over time, all fiat currencies stand to depreciate against hard currency – gold and silver.

For now, the cyclical upswing in the U.S. Dollar Index is masking underlying dollar weakness. Its purchasing power, the ultimate measure of its “strength,” continues to decline.

Market cycles are often driven based more on sentiment and momentum than underlying fundamentals. But fundamentals do ultimately determine how viable a given market move is for long run.

Investors will eventually realize that the depreciating U.S. dollar isn’t a viable safe haven from financial or geopolitical turmoil.

And at some point, not even nominal dollar “strength” on foreign currency markets will prevent precious metals from trending toward their fundamental value as the strongest forms of cash.