A bad run for gold and silver markets this summer is dimming hopes for the metals being able to finish out the year with some good gains.

Bad news for the economy, however, may ultimately be good for precious metals prices. That’s because the Federal Reserve is hoping to see more economic pain before reversing course on rate hikes.

Fed chairman Jerome Powell has specifically stated that he welcomes a “softening” in the labor market. In other words, he wants more Americans out of work and in financial straits in order to ease inflation pressures.

Politicians in Washington, D.C. who continue to add more fuel to the raging inflation fires by ramping up debt-financed spending programs won’t be dissuaded by rate hikes. But central bankers figure that they can drain liquidity from the real economy by making it more difficult for businesses to borrow and hire new employees.

Powell must have been happy to read last week’s jobs report. It showed the official unemployment rate increased to 3.7% in August (from 3.5% the prior month).

While still low historically, the unemployment rate as calculated by the Labor Department fails to account for millions of people who are currently out of work.

For example, it excludes “discouraged” workers who have been out of a job for too long (such as those who left the labor force in 2020 when pandemic hit). It also fails to include part-time and gig economy workers who are seeking, but cannot find, full-time employment.

An Alternate Unemployment rate calculated by John Williams of ShadowStats shows that in August, 24.6% of Americans were jobless.

Job seekers are likely to face tougher times ahead, especially if the nascent recession (not yet acknowledged by government statisticians) worsens.

The latest jobs data has investors now anticipating the Fed will scale back its rate-hiking plans at its next policy meeting later this month. The worse things get for the economy, the more Jerome Powell and company will pivot toward looser monetary policy.

A more dovish Fed will likely coincide with a peak in U.S. dollar strength on foreign exchange markets and a rally in contra-dollar assets such as precious metals.

The smart money is positioning for a turnaround in gold and silver markets.

According to SentimenTrader “The smart money is buying silver. For only the 3rd time in history, commercial hedgers are holding a net long position in silver futures. The other two preceded 20% rallies.”

On the flip side, sentiment among speculators and the public in general toward gold and silver is in the dumps. This is a good sign for contrarian bargain hunters. Big rallies typically begin when sentiment is bleakest.

Precious metals bull markets also often kick off when the gold:silver ratio is at an extreme high.

Last week, the ratio ran up toward the top of a 20-year range that was only exceeded during the 2020 pandemic panic. 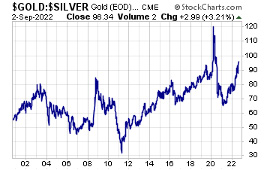 Silver’s charts may look bad at the moment, but the opportunity for buyers to obtain the “poor man’s gold” at an extreme discount is too good to ignore.