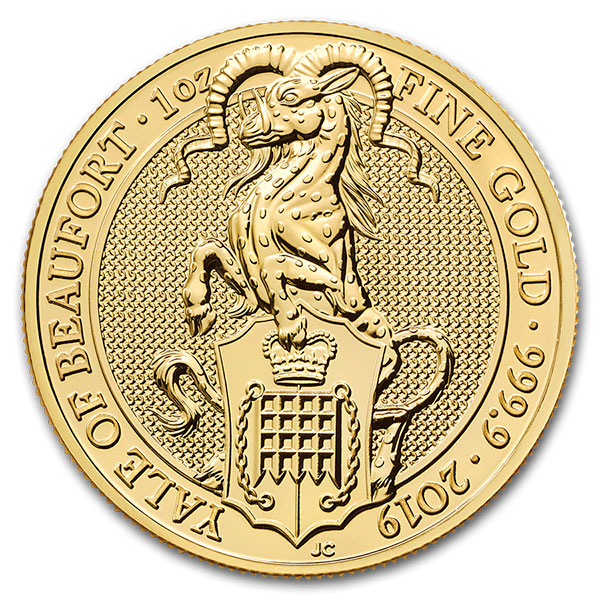 The Yale of the Beaufort in Beautiful .9999 Gold

Money Metals Exchange proudly offers the Yale of Beaufort - 7th in the popular gold Queens Beasts coin series. Britain's Royal Mint just released this stunning 1 oz gold Queens Beasts Yale coin and the mintage will be limited. When the next bullion coin in the series is issued, production of the Yale will end forever. Buyers should not delay.

The yale is a mythical beast, described as the size of a hippopotamus with the tail of an elephant, the jaws of a boar and of a black or tawny colour. This latest release features another original portrait by Royal Mint coin designer Jody Clark. Regal, rare and magnificent, its most prominent feature is its horns - the focal point in the design. Check out the Beast Metals.

The coin's obverse carries the iconic portrait of Queen Elizabeth II. The weight and purity of this sovereign coin is guaranteed by the British government. (Queens beast Yale)

These stunning gold coins are carefully crafted and issued in limited release. If that isn't enough to make them stand out, the beautiful image of the Yale and shield of Beaufort on the coin's reverse certainly will.  Each is minted with .9999 pure gold, and denominated with £100 (British pounds). The coins ship from the mint in boxes of 100 coins -- 10 tubes filled with 10 coins each, though investors may buy in any quantity, with no minimum purchase.

Britain's Royal Mint has been minting the coins of the realm for more than a thousand years. Sir Isaac Newton served as Warden of the Mint in 1696. Among other duties, he was responsible for investigating counterfeit coins. After 3 years in that role, he was appointed Master of the Mint, a title he retained until his death in 1727. Buy gold queens beasts online today!