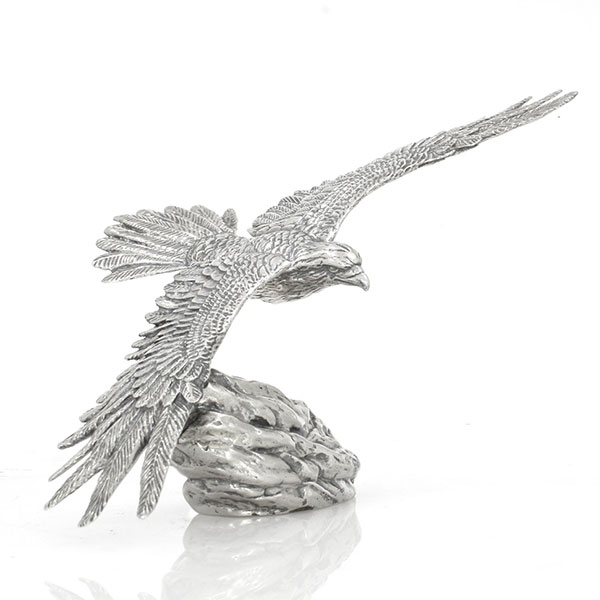 The Eagle represents the ideal of freedom through the centuries. It was no accident America's founders incorporated the image of the Bald Eagle prominently on seals, coinage and other prominent symbols of our nation. Liberty, and the power to defend it, is the message they sought to project.

From ancient Sumerian texts and Greek Mythology, to present day Native American ceremony, the eagle was first known as a messenger of God, and the link between the physical and spiritual world. And this connection may even pre-date written language. The oldest record of human ancestors interacting with eagles dates back 130,000 years! In Croatia, 8 talons used as jewelry were found alongside Neanderthal remains were discovered in 2014.

The eagle, the undisputed “King of the Skies”, has been used throughout history to depict strength, courage, protection, wisdom, and freedom. This bird was first seen as a battle standard in 540 BC by Cyrus the Great, and used in Roman Heraldry around 102BC by consul Gaius Marius.

It was this rich Roman history, and symbolism that lead the bald eagle to become adopted as the official emblem of the United States of America.

Eagles can be found throughout the world, but the bald eagle is found primarily in North America. The name comes from the English word piebald, which means “white-headed”.

The Soaring Eagle statue captures this majestic bird in full flight. It is part of the Great Outdoors Collection from Rearden Metals.

The Symbol of Freedom

A story widely circulated during the American Revolution claimed that at an early battle of the war, the noise of the fighting woke the bald eagles in the nearby mountains. As the birds swooped down from their nests, they began to make loud cries. The American soldiers are said to have thought the eagles were ''shrieking for freedom.''

"Thus the eagle, full of the boundless spirit of freedom, living above the valleys, strong and powerful in his might, has become the national emblem of a country that offers freedom in word and thought and an opportunity for a full and free expansion into the boundless space of the future."