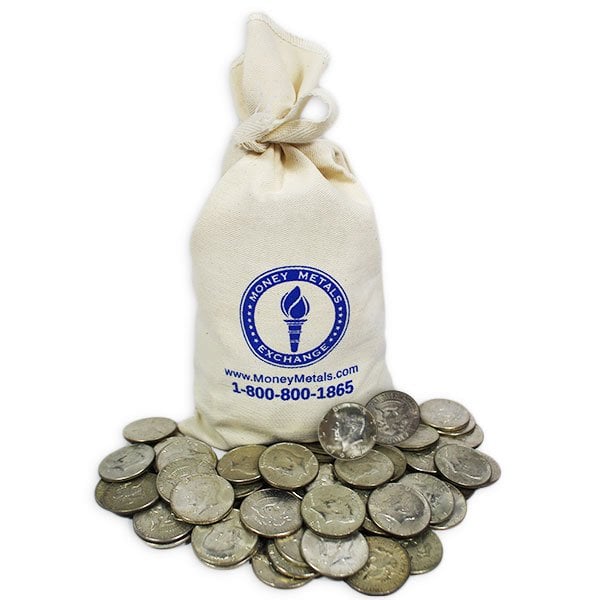 Lowest Price Per Ounce of Any Silver Product!

When the US Mint abandoned silver coinage, they didn't do it all at once. The Kennedy half dollars, or 50 cent pieces, were minted using 40% silver from 1965 - 1970. Meanwhile, dimes and quarters which had been 90% silver otherwise referred to as a junk silver coin, were produced as clad coins with zero silver content starting in 1965.

The Kennedy half dollar silver coins featuring John F. Kennedy were first issued in 1964, at 90% purity. Production began just prior to the decision to eliminate the silver standard in United States Mint coins. These circulating coins were designed to honor Kennedy who was assassinated in November 1963. Congress authorized the new design within a month of Kennedy's death and the Mint began production in January 1964.

Kennedy Half Dollar Coins did not circulate very successfully. Americans tended to hoard the Kennedy silver coins, because of the precious metals content, making the coin values increase. They also felt that the JFK Half Dollars, were a memento of the popular president and therefore considered them to be more of a commemorative coin versus money. Later, the rising silver price resulted in many of these coins being melted and converted to other silver bullion products.

The good news for silver investors is that these Kennedy Silver Half Dollar coins often have less wear than the more popular 90% silver coins, which circulated more widely over a longer period of time. And they are almost always the cheapest option when it comes to silver, especially when it comes to official US silver coinage.

The 40% half dollar coin will often sell at a discount to their melt value. That's right, 40% Kennedy halves are just about the only way for someone coin collecting or investing in precious metals to buy silver below the spot price. They are not always available, but when inventory is available it tends to move quickly!

Money Metals and 40% Half Dollars - Fabulous!

This was my first purchase from Money Metals and I have to say - loved it!! Money Metals did a fantastic job with packaging - was totally surprised by the bags the coins came in for storage - I had purchased from another dealer before.. I'm new to silver stacking... and it was just rolls - but Money Metals did a great job, and the product is just what I was looking for - again, I really appreciate the plastic sealable bag in the box and the velvet-like tie bags inside that bag!! WOW!! Blew me away from my previous other dealer purchase. Keep it up MM because we're planning on getting more, Lord willing - Best!

I have ordered from Mkney .emails a couple of times. They NEVER disappoint NEVER. There was only 2 of my coins that even showed a little bit of wear, all the others are nice and Shiney. I will be ordering again. OH WAIT.... I currently have another order on the way.... ❤ MM Thanks

I was shocked at the good condition they were in, I’m completely satisfied and will purchase more.

I'm excited to have these coins. They are in great shape, packaged well and arrived safely. This is just my second purchase of silver and I'm having so much fun. MMX makes every transaction so easy and even newbie friendly. I didn't know what I was doing but, I am learning so much through the site. I love that I can collect little by little.

I ordered $20 face value initially. When the coins arrived, I was pleasantly surprised. There were a few coins that were a bit dirty or worn, but there was also a number that were almost in uncirculated condition. A couple coins were in need of care if you were to use them as a display. Overall, it was a good buy. I ordered another batch shortly thereafter. I have found some of the most competitive prices at Money Metals. Keep up the good work.