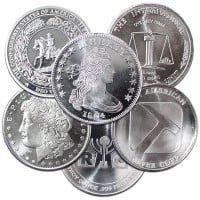 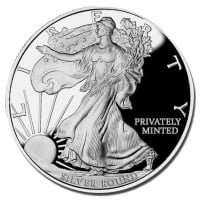 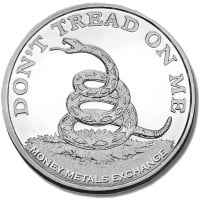 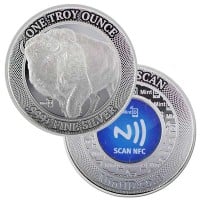 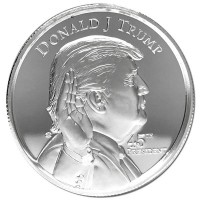 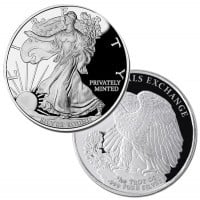 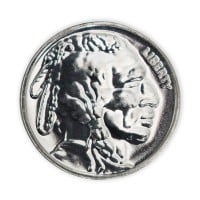 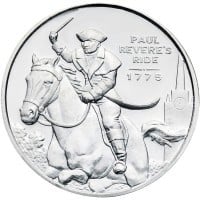 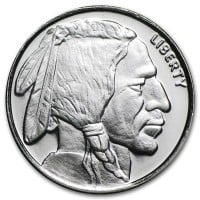 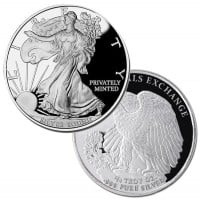 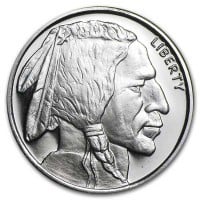 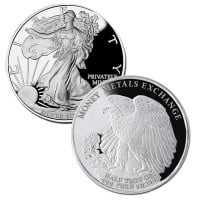 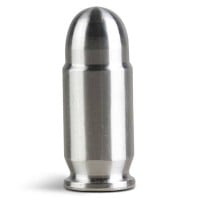 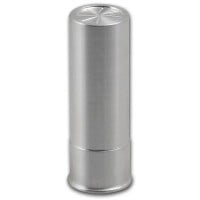 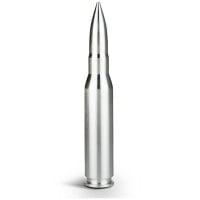 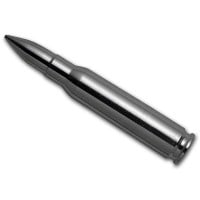 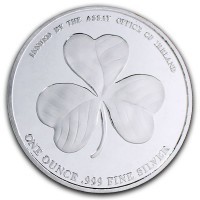 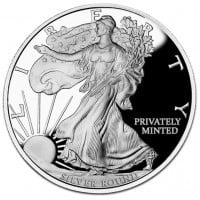 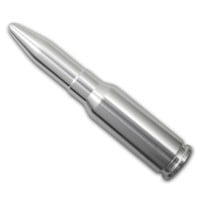 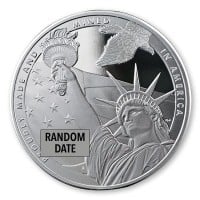 One of the most common questions for those new to buying silver bullion is:

What is a silver round?

The answer: Silver rounds are privately minted coin-shaped silver pieces, produced by private mints. They are not referred to as coins because they are not government minted nor are they legal tender.

Like silver coins, however, they are round in shape and are typically stamped on both the obverse and reverse with symbolic and meaningful designs. They are marked with their metal content and purity. Rounds do not carry a currency denomination (25 cents, 1 dollar, etc), they typically do not have a date, and they may not be mint marked.

Rounds are a great alternative to bullion coins -- offering lower premiums than their government issued counterparts for the same metal content. And they are extremely liquid and common in the market. Dealers trade them in quantities rivaling popular coins such as the American Eagle or Maple Leaf silver coin, providing assurance they will be easy to sell when the time comes.

Silver rounds and silver coins are fabricated exactly the same way, so it is reasonable to think that their premiums might be similar. The labor involved in fabrication of coins and rounds drives much of the premiums charged for bullion products. So part of the premium difference in rounds versus coins can be explained by costs and efficiency in the private sector relative to government. Private mints and refiners compete for business, government mints do not.

Both rounds and coins start as molten silver which is poured into an ingot. The ingot is sent through a rolling mill and formed into a thin silver strip about 5 inches wide. It's then annealed to remove the work hardening in the silver. Then round silver blanks are stamped from the strip and “rimmed.” Finally, the finished blanks are minted – a large press with dies for the obverse and reverse stamps each blank with its design.

The U.S. Mint produced 18 million silver American Eagles in 2017, another record. Many investors like the perceived credibility and government guarantee that comes with official, legal tender coinage, and they are willing to pay a dollar or two more per ounce to get it.

The dysfunctional U.S. Mint currently charges wholesale premiums for their bullion coins (including gold coins), roughly three times those found for privately minted rounds. If demand spikes, the U.S. Mint is likely to simply stop accepting new orders rather than ramp up production. But if demand should fall, don’t expect them to reduce prices either. It would be fair to say market forces scarcely influence the U.S. Mint.

You Get More Silver for Your Money when Purchasing Silver Rounds

Savvy investors currently stand to save as much as $1.00 - $3.00 per ounce by choosing silver rounds vs bullion coins including US Mint Silver Eagles, Canadian Maple Leaf, and a few others. Buying rounds means getting more silver for your money, while still getting beautiful, highly liquid, investment grade silver.

As a result of poorly run government mints, supply issues frequently emerge with newly minted coins, making their premiums volatile. This makes silver rounds even more attractive during periods of high silver demand. As an example, the dysfunctional U.S. Mint, in particular, has suspended or rationed sales when buying silver Eagles on a number of occasions. This inevitably pushes coin premiums higher and often creates delays in shipping.

Meanwhile, during periods of silver demand, supply of rounds remained plentiful, keeping a lid on premiums. Of course, this too could change. With ever-increasing demand for physical silver, even the more efficient and profit-oriented private mints could have a hard time keeping up with demand. Much of the demand for coins is diverted to rounds whenever government mints sell out or impose rationing. But, regardless of what happens, you can expect rounds to remain lower cost and more readily available than coins. 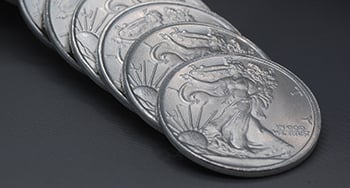 Investors can save a few cents per ounce buying silver bars for investment instead of rounds. But they will sacrifice some flexibility and the savings may not be sufficient for all investors to make that sacrifice. Larger 10 ounce and 100 ounce bars can, of course only be sold or traded in increments of 10 ounces and 100 ounces respectively. That’s not ideal if you only wish to trade an ounce or two. And while premiums on larger bars are typically lower than rounds, it is also a safe bet that 1 ounce rounds will bring a bit higher price per ounce than bars will when it is time to sell.

What Are the Best Silver Rounds to Buy?

As the silver spot price constantly fluctuates, and those price movements are typically small on a day to day basis, it is quite possible to see a 5% move in 24 hours and 25% in a year. Of course, any change in the silver price has a direct impact on the value of pure silver bars or silver rounds. That said, even though the spot price is major factor contributing to the silver coins value of the bullion, there are many other factors contributing to the final purchase price of silver bullion such as minting, taxes, dealer margins, or shipping.

Silver and gold are both precious metals that are widely used in industries such as medical sciences, environmental sciences, technology, and more… These industries are growing and the demand for silver in particular are increasing every year.

Consequently, because silver is an economically valuable and limited natural resources, as demand increases so does the value, making silver a sensible investment. The growing scarcity of silver has been increasingly recognized since the U.S. government stopped using the white metal in coins in 1964. Even though it has been formally demonetized, silver is widely considered to be real money as the purchasing power of government issued clad coins and paper notes have declined dramatically in recent decades due to inflation.

Probably the two most popular silver rounds traded today are the Walking Liberty and Buffalo Silver Rounds -- they are both attractive and a good-value option for low cost silver. They are so popular that you can find them produced by all existing private mints and provided by all online dealers. Because of the great range of their producers, they vary to some extent..

What you would normally find on a Buffalo Silver Round is similar to the classic American Buffalo Nickel (also called the Indian Head Nickel) thus the name. On the obsverse, there is the American Indian Head and engraved onto the upper right of the coin you can find the word ‘Liberty.’ On the reverse, you can find the American Bison Buffalo and at top and bottom there should be an indication of the weight of the round and a stamp with the purity of the silver. These rounds come available in many variations and sometimes in silver fractionals but the most ubiquitous one is 1 oz – 1 Troy Ounce) of silver purity .999.

An important benefit of the standard Buffalo round is that because of its huge popularity there is a great amount of information available. For example, you can find their prices, directly influenced by the price of silver spot, from online metal dealers updated as frequently as daily.

This silver round is also well-known for its convenient size and value: it is popular for small transactions and can be easily deposited in safe deposit boxes.

As it is a universal coin that can be found easily, the premiums over silver spot is typically small – you essentially pay for the silver it contains rather than it rarity and other more subjective qualities.

There are good options in rounds for people looking for silver to barter with. Money Metals Exchange offers silver rounds as small as 1/10th ounce. Compared with Pre-1965 US silver coins -- perhaps the most popular product for use barter situation -- the rounds have the advantages of beauty, newer condition, and simplicity to valuing. Some old silver coins can be tarnished or worn and calculating the silver value requires a bit more math.

If you want to find out more on other silver rounds such as the Walking Liberty Silver Rounds, Don’t Tread on Me, and Paul Revere, please visit the rest of our pages and browse among our several options of beautiful, uncirculated rounds. Or if you want to look into gold mint bullion rounds and coins, check them out here: Gold American Buffalo. Then, order online or give us a call at 1-800-800-1865 - we’ll lock your pricing and make arrangements to have them delivered quickly and discretely.h.