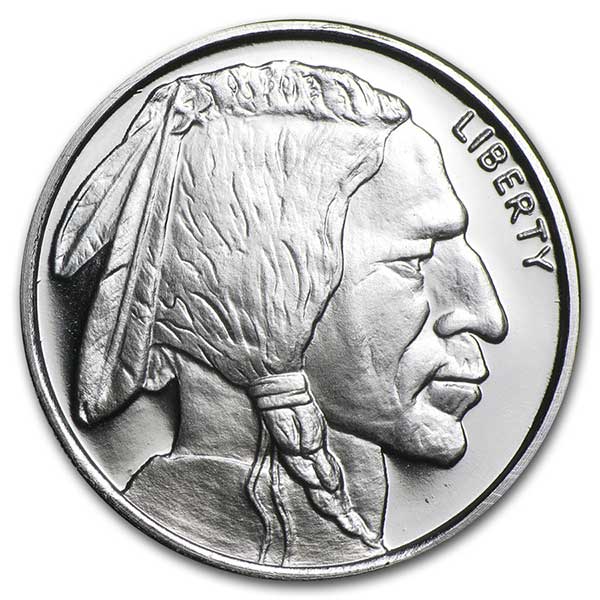 Now the famous Buffalo design can be had in a smaller half ounce denomination. These .999 fine silver ½ ounce Buffalo Silver Rounds (1/2 troy oz silver) are ideal for silver stackers looking to add fractional silver to their holding.

Between 1913 and 1938 the United States minted the iconic "Indian Head" or "Buffalo" nickel. This design remains one of the most iconic in U.S. minting history. These half oz silver Buffalo rounds are modeled after the famous James Earl Fraser design. Its back story makes it one of the most fascinating pure silver bullion rounds to buy.

Featuring James Earle Fraser’s design of an American Buffalo and a Native American, the American Silver Buffalo Rounds depict some of the imagery associated with America’s rich history. No one really knows who the Native American featured in the picture actually is, not even the man himself (Fraser) could give an exact answer.

History teaches that fiat (paper) currencies die – often spectacularly. Governments cannot resist the temptation to borrow and print beyond their means. Eventually they turn to the printing press, trying to maintain the illusion the promises made by politicians are being kept. The effort fails when people using the currency discover it is a bad idea to hold the devaluing paper, and rush to trade it for actual goods.

Confidence fails and the currency dies.

Most people expect that can’t happen here in the United States. “King Dollar” is the world reserve currency and has been for decades. But the consequences of perpetual overborrowing and overspending are inevitable.

Smart investors are preparing for the possibility of a dollar collapse by purchasing physical gold and silver for sale online or by phone.

Our half ounce silver Buffalo rounds are a great option for concerned investors. The smaller size means they are well suited for making payment in small transactions, or to make change - just what is often needed in barter situations. Every round is stamped with its weight and .999 purity - making it easy for anyone to quickly determine the value.

Given the low premium and the versatile size, every investor should consider adding some ½ ounce rounds to their stack. Other silver products with low premiums, would be silver dimes and quarters, which are great for investors who aren't worried about the look of their bullion, since these coins will have normal wear and tear. If you're not that type of investor, then stick to the Buffalo rounds.

The beautiful design and craftsmanship in our rounds is a great bonus. Whether you are re-selling them to a dealer, or trading them to a neighbor, your counterparty is going to be thrilled to get them.

I always appreciated the Buffalo Nickel and this round pays homage to that coin. Great looking round from a great company! Money Metals is my go to for precious metal purchases.

I am extremely pleased 1/2oz Buffalo silver rounds. Beautiful to look at. My dealings with MMX have alway been professionally handled, and very quickly. They keep you informed every step of the way, regardless of the size of the order. The packaging is discreet and very secure. I cannot picture buying from anywhere else. Highly recommend! John T 5-26-21

What can I say, FREE silver is awesome

Thanks, just another awesome incentive to keep buying from u guys. Been buying PM'S FROM you since 2016, and wont stop anytime soon. Thanks again

What a beautiful round. Only wish I had ordered more! A wonderful way to introduce someone to stacking/collecting...