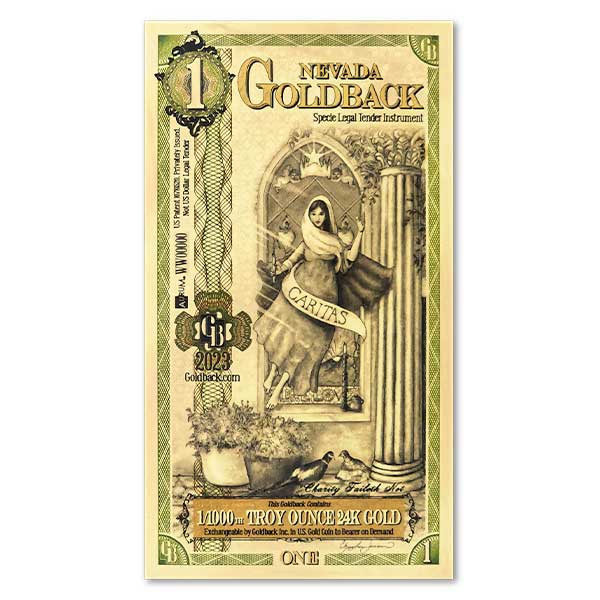 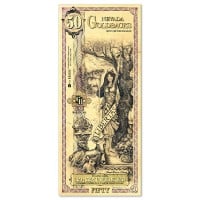 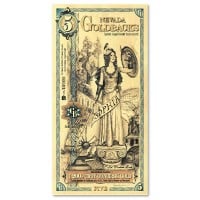 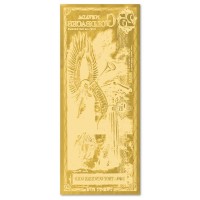 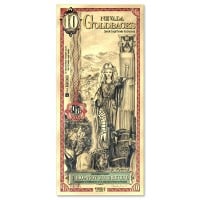 The bill features a beautiful image of Caritas, the Virtue Charity.

Caritas, or Charity, is the Virtue beautifully featured on Nevada’s 1 Goldback Denomination. This is her 1st appearance on a Goldback Design, and is notably patterned after a depiction of Mary, the mother of Jesus, in St. Augustine’s Catholic Church in Austin, Nevada.

Catholicism is Nevada’s most dominant religion and St. Augustine’s is the oldest Catholic Church building in the state.

Like all Goldback designs, the art contains many levels of symbolism. Some major symbols of Charity featured include: the Sierra Nevada Lily, which is in the container below Mary’s feet to the right; the Mary Magdalene Rose, in the container on the left; cherubs crowning Mary and Burning Hearts to either side of her; Charity’s lit candle in her hand, and Nevada’s sun, rising over the mountains seen through the window behind her.

The window below Mary’s dress hides the word “Love”, the symbol of a square, a compass, a wagon wheel, and rosary beads. The viewer will also note the ash tree, symbolizing marriage and Las Vegas’s status as the marriage capital of the world; and a family of ring-necked pheasants, which showcase the selfless acts of nurture and protecting their family and young.

Thank you for carrying these!! they are beautiful and my grandkids want to take them home. I have purchased a few of these and am very impressed. Money Metals all the way!!!! Thank you!!!!!!

Very good, I would like to have it for my collection

I ordered 5 of the as well as the other 3 and I am completely satisfied. I look forward to purchasing more in the other denominations.

I trust Money Metals. I have been ordering the past 9 months and will only buy from them! Love the Goldbacks. High quality and they are great gifts.

Placed my first order with MM for these great Goldback bills and was super impressed. They are so aesthetically pleasing to the eyes and super cool to play with. I got 1's a 5 and a 10. The 1's I'm going to use to give out to friends and kids and to play around with. I plan to order a bunch more. They will make a great statement maker if you leave them with tips at restaurants etc... Love them. Since this order, I've made another order and plan on much more for my new found gold obsession.