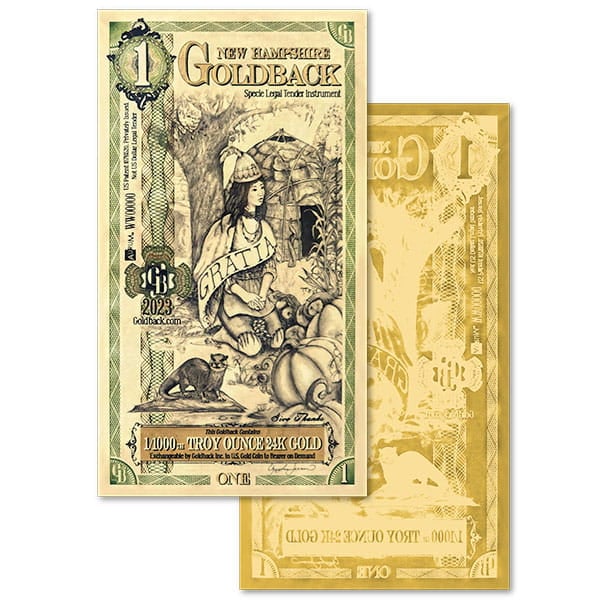 About the Design - Gratia

In her firrst appearance on a Goldback series, Gratia, or Grace, is featured on the New Hampshire 1 Goldback Denomination.

She is depicted as an Abanaki Native American woman from the Algonquin tribes, who have history in the area. She is wearing a traditional dress and beads in front of an Abenaki wigwam. She is accompanied by a river otter, representing resourcefulness and finding joy in the moment with both attributes being key parts of grace and leading a balanced life.

Also present in the symbolism of this design are many elements of Jewish and Christian cultures. This design particularly indicates the Jewish Festival/Feast of Trumpets, Rosh Hashanah , being celebrated alongside the Thanksgiving Holiday. Elements of these celebrations include: the Shofar trumpet next to the wigwam door, the pumpkin, corn, beans, chestnuts, and honeycomb represented by the beehive in the tree.

Gratia can be seen gathering chestnuts and pondering, with the caption below reading “Give Thanks”. This is to acknowledge that the bounties that we are provided with must be worked for to be gathered in, but that we should also be thankful for them. Additionally, the chestnuts remain uncracked, more deeply symbolizing the work needing to be done by the founding fathers of the United States of America in order to bring about the nation where we could enjoy the freedoms that we do.

In the background are elements nodding to, and representing, the many ancient artifacts and “American Stonehenge” that can both be found in New Hampshire and indicate the rich cultural heritage of the area that predates more modern colonization.

These goldbacks are great. They are a great way to acquire true money at a great cost for those who don't have a lot of money to spend. MME is the only gold/silver bullion business that I will do business with.

Gold currency is what you need now

These goldback currencies are what you need NOW! The fiat system is going away soon and we will be back on gold system. These are negotiable and valuable. I have bought gold and silver from Money Metals Exchange for a while and they are honest and reputable.

These are lovely works of art and very durable. So nice to have "fractional" gold!

these are the real deal

i first purchased 5 of the "1" new hampshire denominations a month ago to see if the goldbacks are what theyre claimed to be. regarding durability, ive tried to wear them out shuffling them like a deck of cards, just rough handling them several hours a day as if they were a dollar bill. (ive even used them to pick my teeth haha) and a month later even with a few creases and rub marks on the surface, the gold infused into the polymer did not separate or flake off. they truly are durable no lie. for anyone wanting to switch to a real backed currency with the comfort of knowing they arent cheaply made these are definitely the way to go. i made another large purchase a few weeks ago and will begin to build my wealth separating from the fake fiat/digital currency thats in place. god bless this company for this revolutionary and innovative way to put gold into the hands of average people.

At last, a fractional gold bullion form of barter and payment!! I recently bought several hundred dollars of these Goldbacks and I absolutely love them. I am going to invest several thousand dollars in these goldbacks, I use them for many purchases in my hometown, and have even found companies online that will accept them in trade. This is a great tool to use to educate the American public about the mandate for gold and silver backed currency in this Republic, and they are a beautiful item to present to others. Money Metals Exchange is the lowest cost dealer for buying these Goldbacks, and they have always been up front and completely honest with me in all my gold and silver purchases over the many years I've been a customer. They are my only source for my bullion purchases and will remain so because I know I can count on them for great prices, excellent quality, and reliable service.