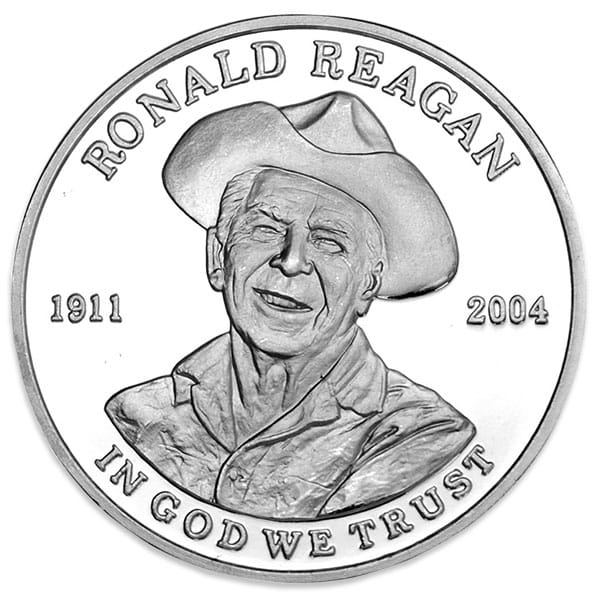 The Ronald Reagan Silver Round

Privately minted 1 oz Silver Ronald Reagan Rounds (Reagan silver coin) are .999 pure silver bullion and commemorate the 40th President of the United States - one of the most popular presidents in modern times.

The obverse features an iconic image of President Reagan wearing a cowboy hat and smiling. The inscriptions read, "Ronald Reagan" and "In God We Trust" along with "1911" and "2004" - the year of his birth and death. The reverse of the round features an image of the aircraft carrier which bears Reagan's name and the inscriptions "Peace through Strength" and ".999 Fine Silver 1 Troy Oz."

Investing in precious metals is not likely to be some sort of get rich quick venture. The name of the game is to preserve purchasing power and profit from the coming inflationary cycle. Central banks and governments are printing and borrowing without restraint. Currency devaluation and market volatility are assured and investors must prepare.

Now people can invest in silver and commemorate a great president who served at a time when America was stronger and less divided. Ronald Reagan silver rounds are an exciting new product offering from Money Metals Exchange – the low-cost precious metals dealer recently voted Best in the U.S. by an independent ratings organization. Get your Reagan silver coin today!

Silver bullion refers to all investment-grade silver bars/ingots, rounds and coins. It’s important however to understand that when it comes to silver coins, there is a slight difference.

Silver bullion coins are minted by government-owned mints. Silver rounds, meanwhile, may look exactly like coins, but are not technically called “coins.” Silver rounds are instead struck by private mints, and do not have any sort of dollar denomination stamped on them, unlike coins. However, when it comes to an investment in silver bullion, rounds are often preferred by investors due to the lower premium they carry versus the more costly legal tender coins.

Reagan silver rounds honor the legacy and achievements of the 40th President of the United States. Reagan has been credited for helping pull the US out of the economic malaise of the late 1970s and early 1980s. He was respected by America's allies as well as our enemies.

The Reagan silver coins come fresh from the mint, so it’s easy to get your hands on pristine quality bullion rounds while paying homage to the 40th president.

Silver is often viewed as an entry-level precious metal for casual investors. “Poor man’s gold” is much cheaper than the yellow metal, as well as the other precious metals platinum and palladium, meaning you get to buy more of it for less.  As of mid 2021 the gold to silver ratio (meaning the amount of silver ounces it takes to buy one theoretically ounce of gold) is over 70 to 1, far below the ratio of 32 to 1 during silver's last price peak in 2011.

As such, in an investment in Reagan Silver Rounds, or any of form of silver bullion for that matter, presents a tremendous value opportunity at the current time. Silver bullion rounds, which are fresh on the market and privately minted, can be had at a lower cost compared to government minted commemorative coin sets.

Regardless of your ideological persuasion or opinions of our 40th president, this silver round depicts an important president whom has been well remembered by history..

Ronald Reagan Coin as a Gift

Some folks are collectors and may not want to add 500 of these rounds to their collection. That is why Money Metals sells these Reagan Silver Rounds in any quantity. Investors can buy a single round or full tubes of 20. They will serve as the perfect gift for anyone who loves our 40th president.

There’s no denying President Reagan is one of the more popular political figures in American history. Reagan rounds are likely to be in high demand for a long time to come.

Silver bullion rounds are a fantastic way to invest in the undervalued white metal. These unique and highly sought-after Reagan rounds will be easy to trade - regardless of whether you want to buy or sell. It is past time to exchange some of your depreciating dollars and other risky paper assets for time-tested physical precious metals. Reagan rounds will help you preserve your long-term purchasing power.

Nice Round. i especially like the Aircraft Carrier on the other side. For someone who appreciates Reagan as a President, This is a much have!

Every coin I have received is exceptional. The packing and mailing process is flawless!

Just a beautiful silver round

Fabulous. I gave them as gifts for Christmas. Everyone commented how beautiful they are and of course having the likeness of President Reagan makes them all the more special. Good work MMX.

they do what they say dell do

they were great they look like proofs, great co. to work with. receive coins in about 15 days, thats with a ck. & thats in texas

I love this President, Ronald Reagan. The coins are Great, Money Metals Exchange has been the best place for me to buy Silver, Gold and other Precious metals.