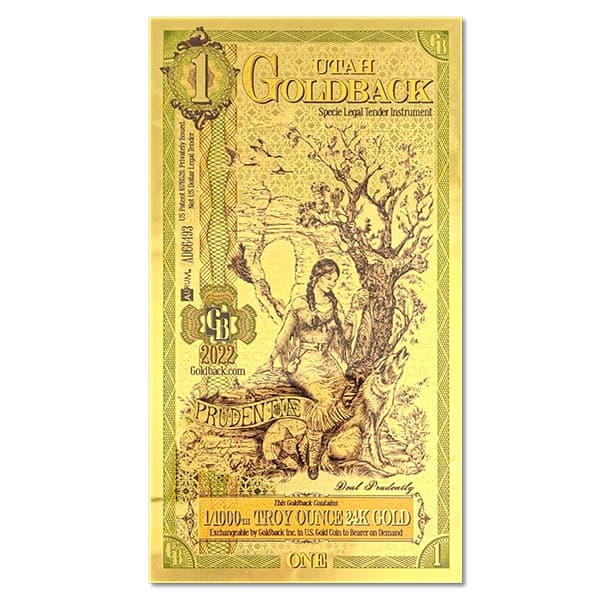 The Utah Goldback Series begins with the 1 Goldback Design, and it is filled with different symbols and cultural nods. The virtue Prudentiae, or Prudence, is featured here as a Native American woman, having many items and attributes traditionally attributed to coming from each of the five most prominent Native American tribes in Utah, namely: the Ute, Paiute, Goshute, Shoshone, and the Navajo.

Prudence is seated on a sandstone rock next to an ancient bristlecone pine tree (one of the longest lived trees in the world), nodding to the throne that Prudence is traditionally seated upon, an elevated status as a virtue from which many virtues claim their origin, and the wisdom learned through the ages.

She is gazing into a mirror held in one hand, symbolizing perspective, learning from experience and using hindsight. On her other wrist is a copper bracelet in the form of a snake, representing the struggle of trials as well as using wisdom to make choices. At her feet is a chipmunk, suggesting the preparations that they make each year ahead of winter as a symbol of prudence through preparedness.

The wolf is next to her, calling out to all who listen to use prudence, and how the use of gold is a keystone to an economy, just how the wolves of yellowstone are keystone predators, and the removal of either has shown a deterioration of their surroundings.

The footing: “Deal Prudently” can also be found in the bottom right corner of the artwork. Finally, in the background Bryce Canyon National Park’s Natural Bridge formation is shown with Canada geese flying in formation.

Great product and artwork also, Got my first one and couldn't wait too order some more so my kids could have some "real" money. Great product and Great service Thank You Money Metals. V Man

If you have seen the way the world is going and look back to the great depression. We are going through the same thing be smart and get silver and gold now before its to late. I have been researching about gold backed currency and its a great way to start buying gold plus if a shtf happens paper money will be useless. This is great way to bargain and trade with without have to melt down a bar or gold round coin

The one word title says it all!

These are a great way to own gold. The artwork/designs are awesome. I have purchased several 1, 5, and 10 denominations and they are all great!