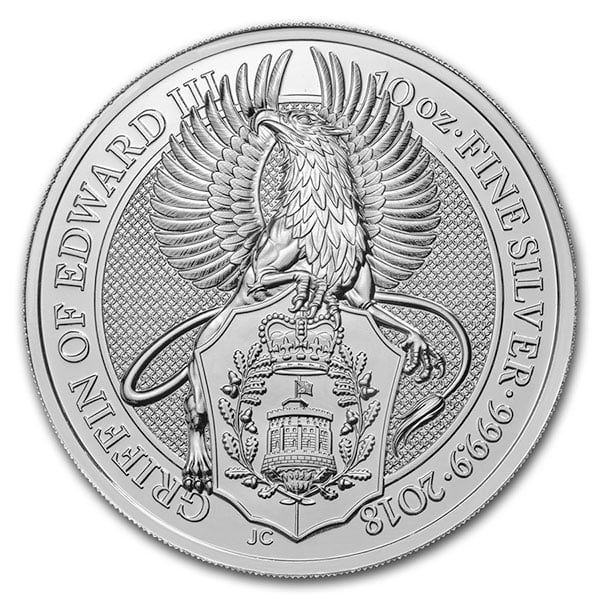 Money Metals Exchange welcomes another addition to the Royal Mint's Queen's Beast series - the 10 oz Griffin. This massive coin with a  2018 date complements the 2 ounce fine silver Griffin coin which is dated 2017. The Griffin is the second in a series planned for 10 designs total.

At the coronation of Her Majesty The Queen, ten heraldic beasts stood guard. The plaster models were created for the occasion, symbolising the various strands of royal ancestry brought together in a young woman about to be crowned queen.

Each silver bullion coin will depict one of The Queen’s Beasts, reimagined by Royal Mint coin designer Jody Clark.  Jody also created the most recent definitive coinage portrait of Her Majesty to appear on United Kingdom coins. His bold interpretation of the Lion of England was the first design to be released, and is now followed by the Griffin of King Edward III.

The coin's obverse carries a portrait of Queen Elizabeth II in high relief along with her name and the 10 pound denomination.

The reverse features a proud griffin with wings spread clutching England's official heraldic shield. The reverse also identifies the silver British coin as "The Griffin of Edward III" along with displaying the coin’s weight, purity, metal content, and date.

The coin artist, Jody Clark, updated her Majesty’s portrait on the to reflect her age - something the Royal Mint had not done since 1998 when Sir Ian Rank-Broadley created the right-profile portrait still in use by some mints. Her Majesty's portrait has been updated 5 times since first appearing on British coinage in 1952.

Well MMX, you have me soooo hooked, I've started collecting the 10 Oz Queen's Beast coins. I don't know if you'll get to fill your back-orders on the 10 Oz coins, but I've set my alerts for product. (I have 3 others already) --Mr.T.--