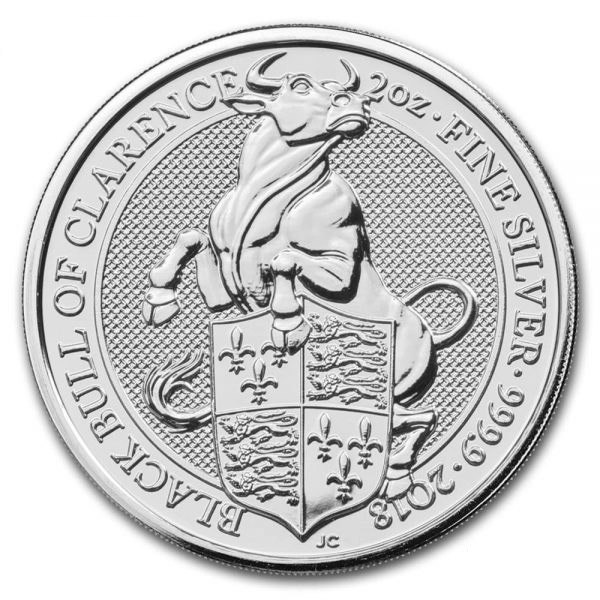 The fifth coin in the popular British Queens Beast bullion coin series from the Britain's Royal Mint has just been released, and as usual, it is stunning. Introducing Britain Queens Beasts the Black Bull of Clarence -- the coin issued by the Royal Mint in 2 ounces of pure silver.

When Queen Elizabeth II ascended to the throne of England in 1953 in Westminister Abbey, at the entrance stood 10 statues of the various Queen's Beasts standing guard. The Royal Mint is commemorating these 10 heraldic beasts in stunning fine silver coins. The Black Bull of Scotland is the fifth issue in a series planned for 10 mint silver coins total.

The Black Bull is a symbol of bravery and generosity.

These silver coins for sale are twice the size of other popular bullion coins such as the silver American Eagle bullion coin or Canadian Silver Maple. If that isn't enough to make them stand out, the beautiful image of the Black Bull along with a shield emblazoned with the coat of arms representing the Duke of Clarence on the coin's reverse certainly will. Each is minted with .9999 pure silver, and denominated with £5 (British pounds). The coins ship from the mint in boxes of 200 coins -- 20 tubes filled with 10 coins each, though investors may buy in any quantity, with no minimum purchase.

The obverse side of the 2 oz British Silver Queens Beast coin carries the iconic portrait of Queen Elizabeth II. The weight and purity of this sovereign coin is backed by the British government.

Investors and those silver bullion coin collecting, should not delay. The Royal Mint will produce this coin for a brief period of time and when the coins are gone, they will not be reissued.

Britain's Royal Mint has been minting gold and silver coins of the realm for more than a thousand years. Sir Isaac Newton served as Warden of the Mint in 1696. Among other duties, he was responsible for investigating counterfeit coins. After 3 years in that role, he was appointed Master of the Mint, a title he retained until his death in 1727.

So many beautiful coins and all are stunning in quality and value for funds spent. Designs and proof uncirculated quality makes each a treasure to behold or to own in the beast series. All quality as is MMX in there handling from start to receive my stunning newest edition. Get them as you can, they will not last long and never to be repeated edition for added value and collectability as well .. love my coins .