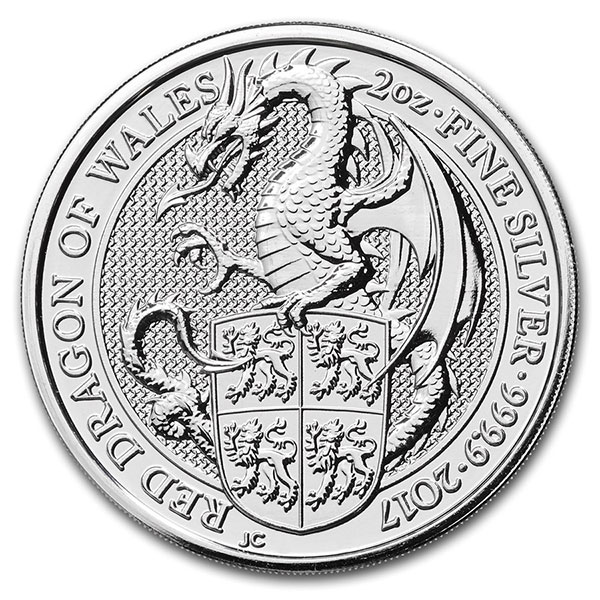 The "Dragon coin" is the third in the Queen's Beast series of coins. The British Royal Mint will produce 10 total in the series. Dragon coins are beautiful, well-crafted coins and they are even more interesting because they are minted in the large 2-ounce size.

When Queen Elizabeth II was crowned, statues of ten heraldic beasts stood guard. Each symbolized a strand of royal ancestry weaving through history and culminating in the young queen. This release features the Red Dragon of Wales -- a symbol which also adorns the Welsh national flag.  It is said that Welsh kings first began using the dragon to symbolize their power in the 5th century.

The British Royal Mint captured the majesty of the dragon in this popular, limited issue coin. The dragon holds England's official heraldic shield in its talons with its designation as the "Red Dragon of Wales". And the coin is stamped with its 2 oz weight, .9999 purity and the 2017 date of issue.

The coin obverse feautures a portrait of Queen Elizabeth II in high relief, along with her name and the 5 pound denomination.

Her Majesty's portrait is placed on coins made by sovereign mints throughout the old British Empire -- including Australia and Canada. Over the years the portrait has been periodically updated to reflect the queen's age. The current version was done by Jody Clark. The prior update was done in 1998. In all there have been 5 revisions to her Majesty's profile since first appearing on coinage in the 1950's.

The Royal Mint has been making silver bullion coins coveted around the world since the 9th century. The British Sovereign, a gold coin which remains in production and trades nearly everywhere in the world, has been circulating since 1817.

You can add the stunning Queen's Beast Dragon 2 oz pure silver coin to your holding without paying the big premium you might expect. The cost of the Dragon coin will be comparable to US minted silver coins, such as the American Eagle. The two ounce size makes these Dragon coins a good way to diversify your stack, not to mention being a great way to add some sizzle to your collection.

The Royal Mint has never before produced a 2 troy oz mint silver coin. Each is legal tender for 5 British Pounds.

You are welcome to buy in any quantity, but the Queen's Beast Dragon coin comes from the mint packed in tubes of 10 coins. There are 200 coins in a full mint box -- 400 troy ounces in total weight.

Buy silver Dragon bullion coins before they fly away!

This beast is a real fine example of quality and desirability of just a stunning coin. Glad to have it and most others in the series .. looking forward to the others to add to my collection. But this dragon is a GREAT COIN of the series and a MUST have.

A really cool coin design and has some weight to it to preserve its value.

The British Royal Dragon of Wales is an intricate and genius design! Beautifully crafted to add a unique piece to your silver collection. Definitely a must for fans of the English designs.

Beautiful. My favorite in the set.

Another Beauty of A Beast

The Red Dragon of Wales is a fine addition to the line of the Queen's Beast Coins series. Thick hefty feel to a coin that is certainly "Real Money". For the folks who like to look at their silver carefully, notice the beauty of The Queens Crown on these Beast coins. Thanks for another well packed order, and great delivery time, Look forward to my next order,