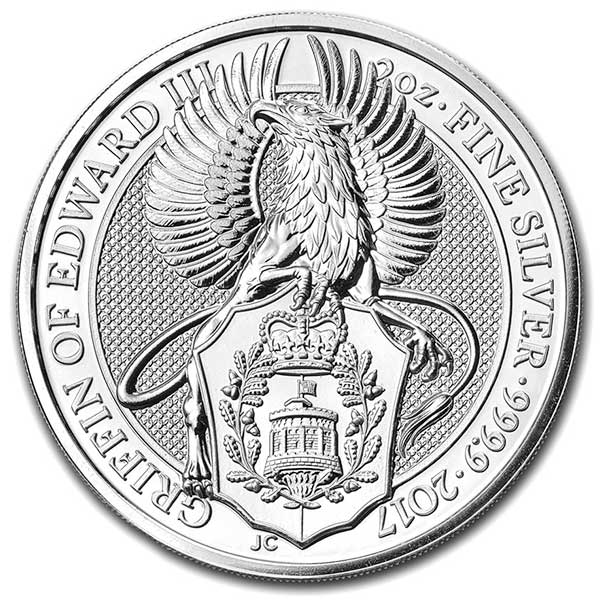 The British Royal Mint just released the second silver bullion coin in its Queen's Beast commemorative coin series of 2 oz silver coins. This Griffin Beast is the second of 10 planned bullion coins - exclusively from one of the world’s oldest and most famous refineries.

At the coronation of Her Majesty The Queen, ten heraldic beasts stood guard. The plaster models were created for the occasion, symbolising the various strands of royal ancestry brought together in a young woman about to be crowned queen.

This stunning silver bullion 2 oz Queens Beasts Griffin coin ships individually or in mint tubes of 10. A full mint box contains 200 coins (400 ozs.). They are the first ever 2 ounce fine silver coins produced by the Royal Mint. The hefty coins are denominated as 5 British pounds - official legal tender in the United Kingdom.

The coin's obverse carries a portrait of Queen Elizabeth II in high relief along with her name and the 5 pound denomination.

The reverse features a proud griffin with wings spread clutching England's official heraldic shield. The reverse also identifies the British coin as "The Griffin of Edward III" along with displaying the coin’s weight, purity, silver content, and date.

The coin artist, Jody Clark, updated her Majesty’s portrait on the to reflect her age - something the Royal Mint had not done since 1998 when Sir Ian Rank-Broadley created the right-profile portrait still in use by some mints. Her Majesty's portrait has been updated 5 times since first appearing on British coinage in 1952.

So whether you're coin collecting or looking to primarily invest, don't forget to grab Britain silver coins like the silver Queens Beast Griffin coin before we run out!

One of my favorite in the QB 2oz silver series! Unrealistically over priced or out of stock elsewhere, MMX listens to its customers when they express interest in a coin. After a little patience, MMX not only alerted me immediately when they got it in stock, they offered a seriously competitive price!! I am now enjoying the QB 2oz Silver GRIFFIN. Thank you.

This coin is one of the most beautiful coins that I own in the series. The quality and the workmanship is impeccable. My order was packed professionally and shipped promptly,

My favorite of most of the Beast Series. Value and quality you gotta get. A MUST have if still available. Most stunning of designs and that 2oz makes it very desirable to collect. Review my collection at will without going to the net. Looking forwards to completing the series. All are OUTSTANDING. Some more than others, depending on your preferences.. All are worth asking price an even more I predict in the future. Worth every dollar for each and every one.

A really cool coin design and has some weight to it to preserve its value.