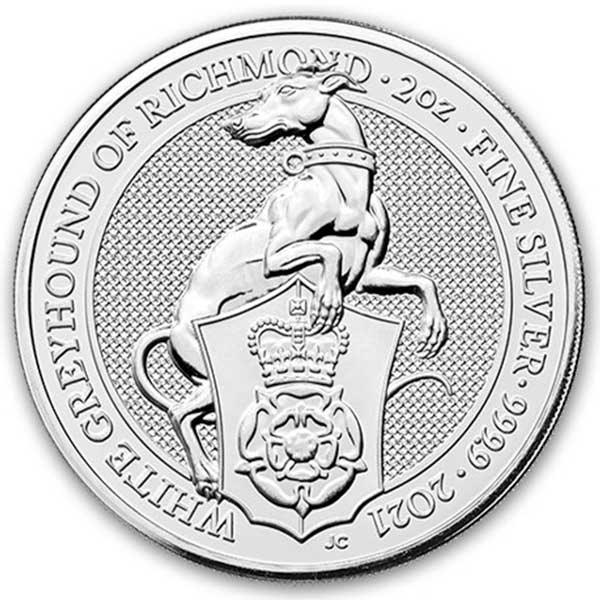 The White Greyhound of Richmond Now Ready to Run in Beautiful .9999 Silver

Money Metals Exchange is now offering the White Greyhound of Richmond - the 10th and FINAL release in the Queen's Beast series of coins from the Royal Mint. London's Royal Mint just released this beautiful silver bullion coin and the mintage will be small. Grab yours today. This coin the last one planned for the popular Queen's Beast series and it will go quickly.

These silver coins for sale are twice the size of other popular bullion coins for sale, such as the silver American Eagle bullion coin or Canadian Silver Maple. If that isn't enough to make them stand out, the beautiful image of the Greyhound and the shield of Richmond on the coin's reverse certainly will. Each is minted with .9999 pure silver, and denominated with £5 (British pounds). The coins ship from the mint in boxes of 200 coins -- 20 tubes filled with 10 coins each, though investors may buy in any quantity, with no minimum purchase.

Just magnificent quality on these Queens Beast's coins. Money Metals Exchange is truly a great dealer. Their personnel are very professional, friendly and efficient. Their prices are exactly as they state. There are no hidden fees or any "shenanigans", the price is constantly monitored to the spot price of the metals. I highly recommend Money Metals Exchange.

Just magnificent quality on these Queens Beast's coins. Money Metals Exchange is truly a great dealer. Their personnel are very professional, friendly and efficient. Their prices are exactly as they state. There are no hidden fees or any "shenanigans", the price is constantly monitored to the spot price of the metals. I highly recommend Money Metals Exchange.

Last one in the series, and this thing could be certified, once again you've come thru

Yes, I'm actually giving a review b4 I received this last coin in the Queen's Beast series. 2021 White Greyhound. What can I possible say without seeing what I purchased?? Money Metals is the only dealer I've been able to find that has the coin in stock and ready to ship. I've said this once and I'll say it twice...... I don't know how, but MMX has inventory when other dealers do not and this is the perfect example. All other dealers are saying this is a "Pre-Sales" item and will ship in late Oct. MMX has it NOW. No Waiting.... Thanks again guys/gals.....I don't know how you do it, but you managed to AGAIN, exceed my exceptions. This completes my Queen's Beast collections....I now have 2 complete sets of The Queens Beasts Series in beautiful wooden display cases. They are amazing looking coins! Thanks you MMX!