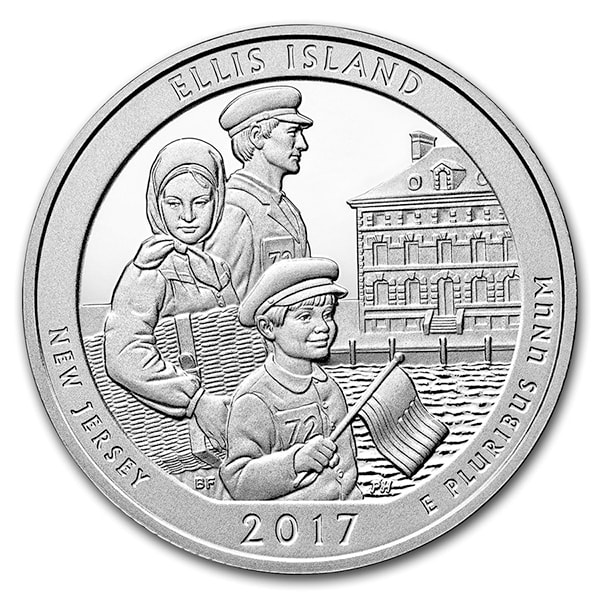 The U.S. Mint released the stunning Ellis Island coin design as the 39th in the America the Beautiful series of coins. This coin is the 4th of the series to be released in 2017. It depicts an immigrant family as their boat approaches Ellis Island, with the child standing in front of his parents and holding a small American flag. In the background stands the island's iconic hospital building. The design was chosen after consultation with representatives from the Statue of Liberty National Monument which includes Ellis Island.

Ellis Island served as an entrypoint for immigrants -- primarily for people traveling to the U.S. by ship. Many were from Europe. Between 1892 and 1954 Ellis Island was the busiest entry station in the country. Approximately 12 million people flowed through there over the decades. The process required 3-7 hours on average for individuals. The island was nicknamed "The Island of Hope" by people seeking a better life in America.

Ellis Island became part of the Statue of Liberty National Monument  in 1965 and is administered by the National Park Service.

The silver commemorative coin's reverse is stamped with "New Jersey" - the state which governs the portion of the island depicted on the coin -- and "E Pluribus Unum". The obverse carries the iconic coin image of George Washington, the coin's denomination as a"Quarter Dollar", the words "Liberty" and "In God We Trust", and "The United States of America".

Each commemorative coin contains 5 troy ounces of .999 pure silver and is 3" in diameter. The weight and purity is stamped on the coin edge, which is smooth rather than reeded.

America the Beautiful - Ellis Island coins are produced by the U.S. Mint and are official, legal tender. Of course the "Quarter Dollar" face value is a far cry from the coin's worth as 5 ounces of silver so the bullion coins are not intended to be actually spent as legal tender.

The Ellis Island coins are the 39th quarters released in a series planned to include 56 coins in total. The series was launched in 2010. Five new designs are released each year. Each features a National Park, National Monument or other prominent historical site.

The Ellis Island quarter, with its enormous size, is sure to be an interesting addition to your holding. Even better, you can add some of these beauties to your holding without paying the enormous premium often associated with other specialty coins of limited mintages. Get your Ellis Island Coin today!

You can now sell your America the Beautiful 5 Ounce Silver - Ellis Island to us, at a price of $149.80 each!