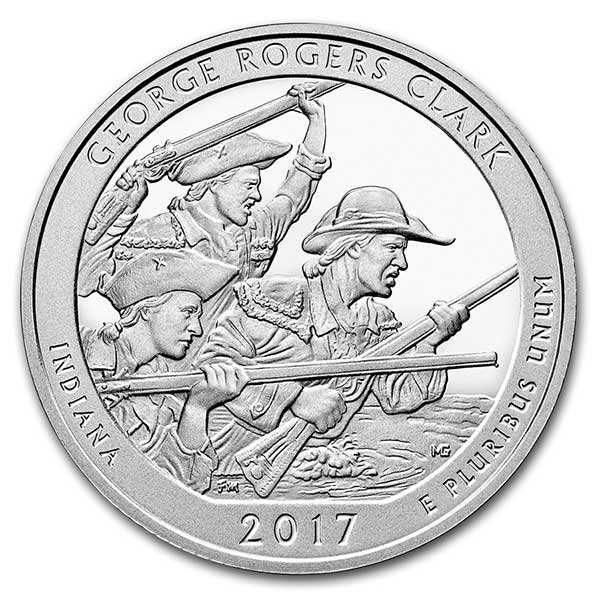 George Rogers Clark National Park is located in Indiana. The historic park is named after a hero in the Revolutionary War.  Clark, the commander of a small force of American soldiers, led his troops to victory against the British Fort Sackville in the icy winter of 1779.  He then went on to other victories, making a major contribution in the effort that ultimately won the war.

The surprise defeat of the British there at Fort Sackville is now considered to be one of the great feats of the entire war. George Rogers Clark and the National Park that bears his name are now being commemorated in silver. Money Metals Exchange is proud to offer these beautiful silver bullion coin series from the US Mint. It is beautifully made from .999 fine silver, and it comes in a massive 5 oz size. These magnificent 5 oz ATB silver coins are the 40th to be released in the America The Beautiful coins series overall, and it is the 5th (and final) release in 2017.

The America the Beautiful series, 5oz silver uncirculated coins reverse features commander Clark leading his men in a charge over the flooded and frozen plain outside Fort Sackville. It bears these inscriptions; George Rogers Clark, Indiana, 2017 and E Pluribus Unum.

The obverse carries the familiar coin portrait of George Washington - the portrait featured on current Washington quarters. The inscriptions on this side include; United States of America, Liberty, In God We Trust and Quarter Dollar.

The US Mint ships these America the Beautiful quarters in tubes carrying a quantity of 10. A full Mint box contains 10 tubes for a total of 500 ounces. The weight and purity of the coin is carried on the coin's rim.

The enormous five ounce America the Beautiful coins are a great way to add interest to your metals holding, without paying more per ounce to do it. These beautiful, limited issue ATB silver bullion coins cost less per ounce than silver American Eagles - the US Mint's popular 1 oz coin.

You can now sell your America the Beautiful 5 Ounce Silver - George Rogers Clark National Park to us, at a price of $136.15 each!