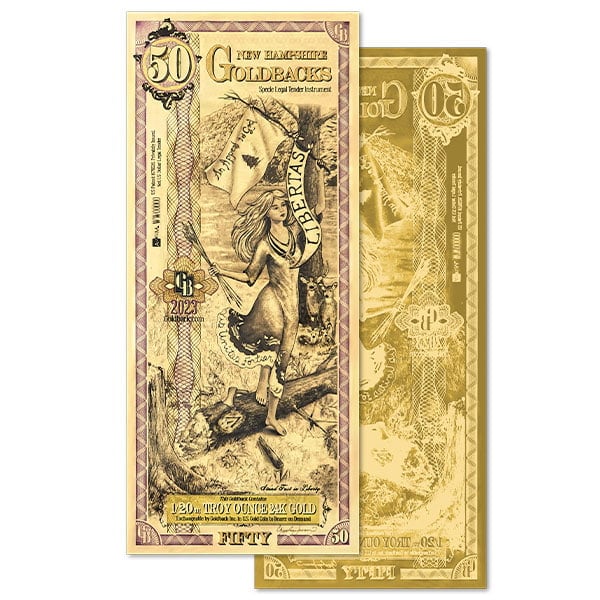 About the Design - Libertas

Here she stands in White Mountain National Forest and is shown with the three elements of New Hampshire’s original seal; the bundle of five arrows she is holding, the fish that are embroidered on her dress, and the eastern white pine tree both behind her and at her feet. The bundle of arrows represents the five original counties of New Hampshire, the fish represents the main source of commerce for the colony at the time, and the white pine tree was elemental in the colony’s exports to be used as ship’s masts.

Also embroidered on the hem of her dress is the motto: “Vis Unitas Fortior”. It is the same phrase that appears on the original seal, and means “A United Force is Stronger”, or “We are Stronger Together”.

Libertas is also shown here wearing a medallion on a ribbon with Liberty’s traditional symbol of a torch as well as a necklace with a laurel wreath and stars, nodding to these elements from the New Hampshire state seal.

Below her reads the caption “Stand Fast in Liberty”. Behind her the state’s animal is featured as a family of whitetail deer. The scene symbolizes unity, and particularly unity in the family, where the principles of Liberty are taught and passed on from one generation to the next. Without these principles being passed on, the price of gaining Liberty will be forgotten and must be paid to win it again.

In Liberty's left hand is a pine switch. She is standing on a fallen pine with King George’s mark carved into it, and a broken axe is at her feet. These three elements are indicative of the events that surrounded what are known as the “Pine Tree” or “Mast Tree” Riots of 1732 - 1734. These riots could be called the first acts of the Colonial Rebellion.

During these events, New Hampshire residents pushed back against the British actions which both appropriated the area’s Eastern White Pines for ship masts and prohibited the cutting down of any trees with a diameter greater than 12 inches. Disgruntled residents formed a rebellion and, in a manner which was more aggressive than the Boston Tea Party, attacked the British sheriff and his deputies for making arrests and enforcing the King’s edict. They gave the sheriff a lashing with a pine switch for each tree that was being contested at the time, then cut the manes and tails of their horses, and ran them out of town.

For this and other reasons, many of the first flags flown by the Rebellion depicted a White Pine on a field of white in some fashion. One of the earliest was used by George Washington on his naval ships. That flag is raised here by Libertas on her pine switch and reads the traditional caption: “An Appeal to God”.