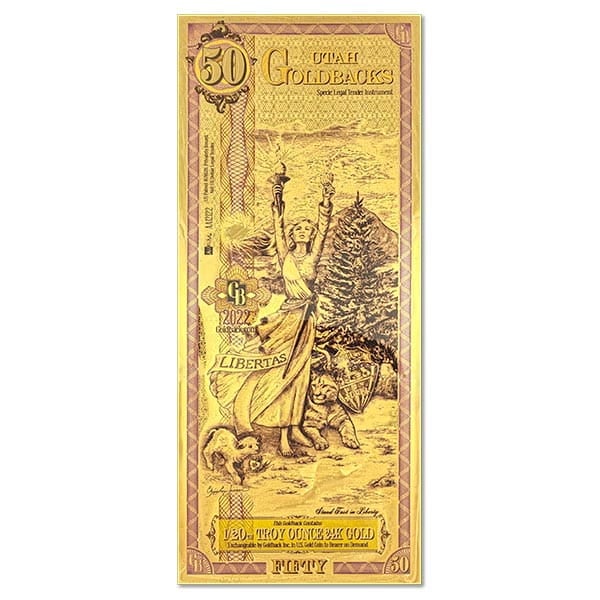 The bill features a beautiful image of Libertas, the Virtue Liberty. It is the culmination of the Utah series timeline. Liberty, depicted as a perfected, angelic woman, having reached a fullness of blessings through the proper employment of Liberty in life.

This design is rich with symbols, including the torch in her right hand symbolizing enlightenment, an overflowing cup in her left to represent the blood of Christ and its connection to the divinely given liberty. Liberty is also depicted with a sheathed sword and a shield resting next to her. Both symbolize that the free must always be ready to fight to defend and preserve the liberty they enjoy, but also that one must be willing to fight to gain a fullness of freedom in the first place. The shield bears the year 1847 (the year the Utah territory was settled) and the name “Deseret”, the original name of the Utah territory, appears there. Deseret is understood to mean a honey bee, a nest of which appears on the shield in like manner to the Utah flag, and nods to the hard work needed to protect Liberty.

Libertas is flanked by a mountain lion on one side and a lamb on the other, symbolizing peace realized through liberty using the biblical depiction from Isaiah 11:6 of the lion laying down with the lamb.

Liberty is featured in the mountain ranges of the Rocky Mountains, surrounded by the Utah state tree, the blue spruce; the state flower, the sego lily; and Bear Lake, the “Caribbean of the Rockies”, in the background. Behind her the sun is rising, representing enlightenment and divine blessings, and acknowledging those things are a gateway to perfection. At her feet we are admonished to “Stand Fast in Liberty”.

Hope for our future

I am so excited to receive them. I have to wait because I ordered them only about an hour ago. What a great idea and noble Utah has been the first to hopefully start a trend with the other States. I know N’évada and New Hampshire are making honest money again too.But it must be the States to put our over reaching Federal government in check- peaceably. We need a Fed. But limited as put forth by our Constitution. Utah, Nevada, and New Hampshire have shown wisdom.

Currency Of The Future

Finally closed the loop on my collection! These make so much sense! Great investment! I'm so glad that Utah made that law that these can be used as currency!