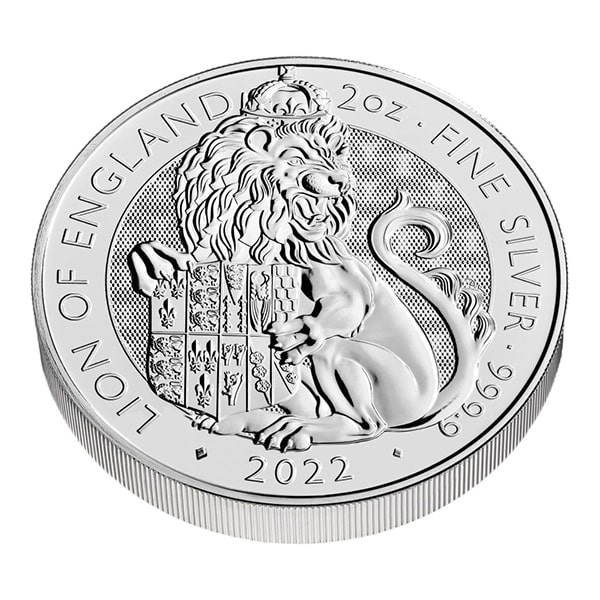 First in the New Tudor Beasts Series From the British Royal Mint - 2022 Lion of England in 2 Oz .9999 Silver

The silver mint coins which commemorate the Tudor reign have been beautifully crafted by the Royal Mint, which was founded hundreds of years before the House of Tudor. The coins ship individually or in mint tubes of 10. A full mint coin box contains 200 coins (400 ozs.). Each hefty coin is denominated as 5 British pounds - legal tender backed by the government of the United Kingdom.

The coin's obverse carries a portrait of Queen Elizabeth II in high relief along with her name and the 5 pound denomination. The reverse features a crowned lion and England's official heraldic shield. The reverse also identifies the coin as "Lion of England" and displays the coin’s weight, purity, metal content, and date.

You can also look into other silver bullion coins and bars. Silver rounds tend to sell for less, compared to silver coins. While silver bars are a great to invest in larger forms of silver bullion, with most people starting off with a one ounce silver bar, then adding larger sizes to their holding.  If you prefer gold, over the Silver Tudor Beast Lion, you can check out other British Coins gold coins here.

This a great minted coin and I really appreciate MoneyMetals packaging. But one suggestion I would have is to use a reliable carrier like UPS.

I order online a lot, I basically shop for a living, and I was blown away at how good their Customer Service and orders are. I got my coins in two days. I ordered them on Sept 12 in the evening and by Sept 15 they were delivered in the afternoon. The packaging was the best I've received any coins in and their communication and follow up prompted me to leave a positive review on the BBB website. Honestly, in all my years ordering online, this has been my best experience.

Beautiful coin! The weight is right and quality as well. When it comes to money metals for my purchases this is the company I will only acquire precious metals from.

A beautiful work of art for the serious numismatist. Thank you, Royal Mint for a splendid masterpiece, and thank you Money Metals, for making this collectible available to us!