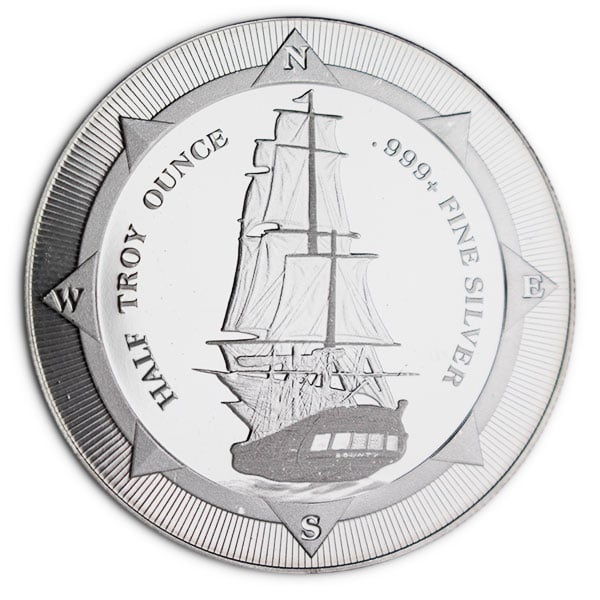 Money Metals is pleased to announce that we have  been designated as the only dealer worldwide for a stunning new HALF oz .999 silver coin BU, the New Zealand Mint’s 2017 “HMS Bounty” – one of the only half ounce legal tender silver bullion coins in the world, period!

You already know Money Metals as America’s most trusted source of low-premium precious metals. Tens of thousands of customers trust Money Metals to bring them the most metal for their money in a wide range of legal tender as well as privately minted formats. Now we’re proud to serve our customers as the exclusive dealer for this small denomination, low premium legal tender 1/2 oz New Zealand Silver bullion Coin.

The NZ Bounty is not only an outstanding value in legal tender mint silver bullion, when compared to higher priced silver bullion coins like American Eagles. But it’s also a spectacular coin than will give commemorative coins and collectible coins a run for their money . The obverse features Queen Elizabeth II and bears the coin’s legal tender denomination which is a face value of one New Zealand dollar. The reverse depicts Her Majesty’s Ship Bounty under sail, circumscribed by an eight-point compass.  Also, its weight and purity is guaranteed by the New Zealand Mint.

This 1/2 oz HMS Bounty coin is the second denomination of this design, with the 1 oz silver coin being the first. You're not going to find these HMS Bounty coins from anyother dealer in the US. Therefore, for those who are interested in coin collecting, these are a great way to add variety to your collection.

The HMS Bounty: A three-masted merchant vessel built in England in 1784, the HMS Bounty was purchased by the Royal Navy in 1787. She was sent to the Pacific under command of William Bligh to acquire breadfruit plants from Tahiti and transport them to the British West Indies in hopes of producing edible harvests. In September 1788, the ship sailed past the southern tip of New Zealand on its long and arduous voyage. The mission was aborted in April 1789 following a mutiny led by Acting Lieutenant Fletcher Christian. This was the famous Mutiny on the Bounty, subject of three films including the 1935 classic starring Charles Laughton and Clark Gable. The mutineers burned the ship on Pitcairn Island in 1790 in order to avoid detection by the Royal Navy, which sought to return them to England for trial. The remains of the Bounty were discovered in 1957, and various parts have been salvaged. Though its service was short and its end tragic, the Bounty remains a bold symbol of the global quest for wealth and prosperity.

The New Zealand Mint: The New Zealand Mint has been producing legal tender coins, bullion, and collectible medallions for more than four decades. New Zealand’s only precious metals mint, it prides itself on high quality design and production. The silver Bounty was specifically produced for the south Pacific island of Niue(NEW-ay), a self-governing state in free association with New Zealand; its residents are New Zealand citizens, and New Zealand conducts most diplomatic relations on its behalf. Be sure to check out all our New Zealand Silver Coins.

Such a great looking coin. Wish i had gotten in on the full ounce but this is a sweet looking coin on it's own. Good score Money Metals.

Absolutely love them! Beautiful coins! Super fast shipping! I highly recommend Money Metals to everyone! Will be doing more business in the future as soon as I get back to work! Thank you Money Metals!

These coins are beautiful. Customer service is excellent and shipping was fast. Very pleased with my purchase. Will be purchasing more.

These coins are gorgeous and a great value. Shipping was extremely fast, and the coins were well packaged. I'm extremely pleased with this purchase.

You can now sell your New Zealand Mint's HMS Bounty - HALF Oz Silver Coin to us, at a price of $13.83 each!