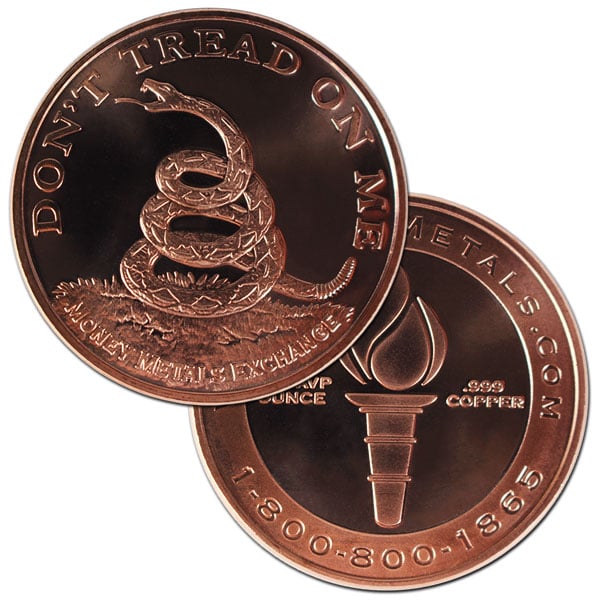 There is currently an online order maximum of 1000. 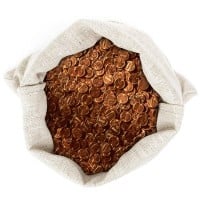 1 Oz Copper Rounds with Patriotic "Don't Tread on Me" Design

Money Metals Exchange is pleased to offer the popular "Don't Tread on Me" design on a pure copper round. These beautifully made rounds weigh one standard (avoirdupois) ounce and are shipped in mint tubes containing 20 rounds.

Money Metals Exchange commissioned these beautiful "Don't Tread On Me" copper rounds to provide a way for customers to accumulate pure copper in a form that will be easier to trade. And it is high time to reinvigorate the very symbols of Liberty upon which this nation was founded. These symbols are not to be denigrated and demonized as the highest levels of our political class are now trying to do. Instead they must be renewed, revered, and passed on to new generations who want the Founding Father's principles restored in modern-day America.

"Don't Tread on Me" Rattlesnake - (obverse)

In 1754, Benjamin Franklin first popularized the rattlesnake as a symbol of national unity during the French and Indian War. By 1774, it had become the formal symbol of the Freedom Revolution when Paul Revere added it to the masthead of his newspaper, The Massachusetts Spy, and showed the snake fighting a British imperial Dragon. In 1775, Continental Colonel Christopher Gadsden incorporated a coiled rattlesnake with thirteen rattles (symbolizing the colonies) above the motto "Don't Tread on Me" on an early American flag. Buy a copper bullion today!

Historians believe Franklin anonymously published the following of several arguments why the rattlesnake should be chosen as the symbol for America (rather than the eagle, which he amusingly opined was "a bird of bad moral character"). "She never begins an attack, nor, when once engaged, ever surrenders: She is therefore an emblem of magnanimity and true courage... she never wounds 'till she has generously given notice, even to her enemy, and cautioned him against the danger of treading on her." Check out our copper for sale! Copper Rounds are a great addition to any collection. These one ounce of copper coins have great appeal to many buyers.

Money Metals the leader in no pressure precious metals investing.

Being a second amendment supporter these coins speak to our past and are beautiful in their own right. Buying from MMX is a no-brainer.

This is my first foray into buying a commodity of this kind..the coppers are beautiful coins in their own right! I DEFINITELY am happy with this company and I plan on being a long time customer! Thanks, keep up the great work!

I purchased these to start collecting some copper coins, but they were more than expected and I was very pleased with their appearance and beauty.