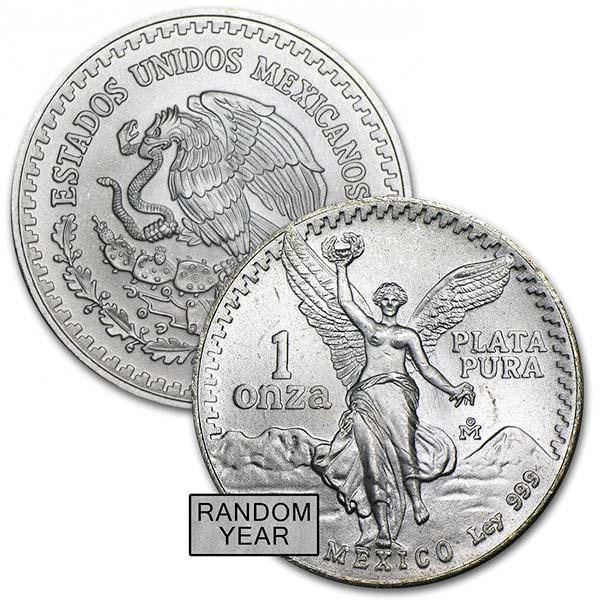 Silver has played a major role in the history of Mexico. The Native People of Mexico used the countries abundant precious metals long before European conquerors arrived, drawn by the riches. Today Mexico continues to be a major producer of both gold and silver. Silver has been used for centuries in Mexico's coinage.

The silver Libertad, a one troy ounce pure silver coin, is produced by La Casa de Moneda de Mexico in Mexico City. It is the oldest mint in either north or south America. The Casa de Moneda was founded in 1535 by Antonio de Mendoza, the regional Viceroy, under decree from the Spanish Crown. Coins produced there, such as the silver 8 real, were among the most widely circulated in the Americas and in Asia until the 18th century.

The Libertad features the Angel of Independence. The design was modeled after the famous golden statue -- the Monumento a la Indepencia -- located on Mexico City's Paseo de la Reforma in the city's downtown. The monument commemorates victory in Mexico's war for independence from Spain. The Angel holds a laurel crown in one hand -- a symbol of victory. In the other hand is a broken chain why symbolizes freedom.

The reverse side of this beautiful coin carries Mexico's National Shield in two different designs which vary based on the date of issue. Mexico's shield, or coat of arms, is a golden eagle perched upon a prickly pear cactus as it devours a rattlesnake. Coins minted prior to 1997 feature the shield with text that reads "Estados Unidos Mexicanos" (United Mexican States) located just above. Coins issued more recently are stamped with the modern National Shield at the center surrounded by 10 earlier versions from the Nation's history.

The Angel of Victory dominates the coin's obverse. In the background are two volcanoes -- Popocatépetl and Iztaccíhuatl. These exact design will varies based on date, though the major elements are unchanged from year to year. The reverse is also where you can find the coins weight, purity and date of issue.

Received the libertads the same circumference as the ASE. They are just beautiful to look at real piece of silver art work as well as precious metal currency here.

I have bought several Mexican Libertad's from MMX and they are high quality silver coins every time. Along with the excellent service you will get with every order. I will only shop at MMX and I will only recommend others to purchase their bullion from MMX.

these are for my Mexican girlfriend

I had heard about these Libertads and the quality of Mexican Silver for quite a while and when MMX started to sell them I bought a few to check them out. I have since bought many more and will purchase more if they get back in stock. Absolutely beautiful coins.

I waited and waited to order these and after I got them, I wondered why I waited so long, great variety of years and all in great shape. Good addition to my stock pile. Thank you MMX for the selection