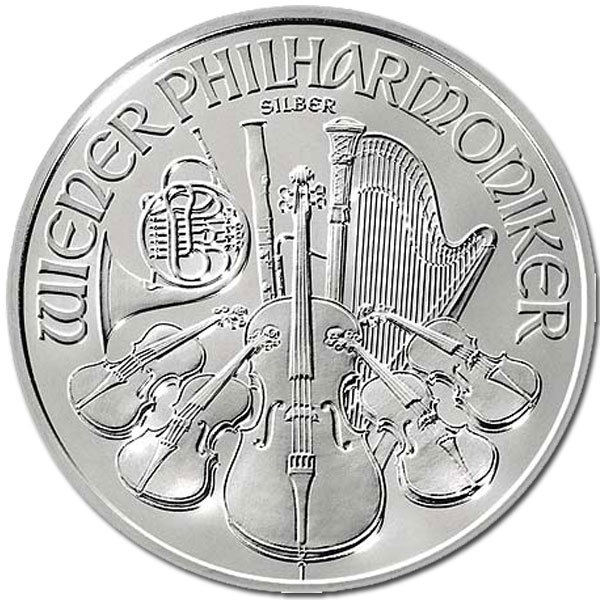 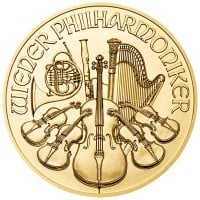 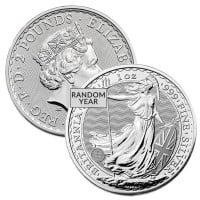 Inspired by the world-wide famous Vienna Philharmonic Orchestra located at Vienna’s Musikverein, the iconic Silver Philharmonic coins are the official silver bullion coins of Austria (Austrian Philharmonic Silver) and have been produced since 2008. These one troy pure silver ounce coins are legal tender in the country of their origin and carry a face value of €1.50.

The world-renowned Vienna Philharmonic, founded in 1842, recruits its musicians from the Vienna State Opera and is a must-see for any music lover who visits Europe.

The Austrian Philharmonic Silver coins are among the most popular one-ounce silver coins in Europe and are accompanied by the gold and platinum coins. The gold version was introduced in 1989, while the platinum coin was first struck in 2016. Check out all our silver coins for sale today!

The gold coins are available in several sizes, from 1-oz to the unique 1/25-oz silver. The 1/2-oz, 1/4-oz and 1/10-oz sizes round out the gold offerings. Larger coins were made throughout the history of the series, though reserved for limited and commemorative editions.

The €1.50 face value Silver Philharmonic contains one troy ounce of 99.9% pure silver (.999). Since its inception, the size has been fixed at 37 mm diameter and 3.2 mm thickness. The edges are smooth and the coin weighs exactly 31.103 grams.

The Austrian Philharmonic Silver coin has gone on to become one of the most famous and sought-after silver coins in the world due its beauty and unique craftsmanship.

Eight years after the introduction of the 1-ounce silver coin, the Austrian Mint introduced the first platinum Philharmonic coin. This relatively new offering contains one troy ounce with 99.95% (.9995) fineness and a face value of €100.

The design of Europe’s most popular one-ounce silver coin took after the Gold Philharmonic coin. Similar to the American Silver Eagle, but different from some other sovereign-mint coins (such as the Chinese Gold/Silver Pandas), the design of the coin has remained largely the same throughout the years.

Created by Thomas Pesendorfer in 1989, the obverse side of the Silver Philharmonic features the pipe organ in the Musikverein, the home of the Vienna Philharmonic. The inscription “REPUBLIK ÖSTERREICH” (“Republic of Austria”) and the coin’s face value denomination surround the pipe organ. The words “1 UNZE FEINSILBER” (“One Ounce of Fine Silver”) are also inscribed on the front of the coin, as well as the year of issuance.

On the reverse side, the coin features a cello in the center, flanked by a pair of violins on each side and various other instruments in the background, including a harp, flute, French horn, and bassoon. The inscriptions “WIENER PHILHARMONIKER” (“Vienna Philharmonic”) and “SILBER” (“Silver”) surround the instruments.

Gilded and Colorized Versions of the Austrian Silver Philharmonic

Since the Austrian Philharmonic Silver coin is not available in proof and uncirculated versions, the Austrian Mint issues two special variants of the 1-ounce bullion coin – gilded and colorized.

The gilded coin sports a layer of 24-karat gold on the reverse and obverse sides. Only key elements of the design are coated in gold. The coating does not contain enough gold to change the actual value of the coin, though it does add to its uniqueness, beauty and collector’s value.

The colorized variant adds muted colors to the instruments on the reverse side. The violins and the cello have wooden colors.

Austrian Philharmonic Silver coins have been among the most popular 1-ounce silver coins in the world ever since their introduction. Like other bullion products, the Philharmonic offers a great value proposition for investors who wish to accumulate low premium products to maximize their investment dollars and get more ounces for the money compared to collectible or rare coins that carry high mark-ups above the intrinsic silver value. The Philharmonic is a low-priced alternative to the Silver American Eagle, whose premium is often 50 cents higher.

The Austrian Philharmonic Silver coins are made in honor of Austria’s national philharmonic orchestra and have risen to prominence throughout the world since the first coins were struck in 2008.

With sales figures of nearly 100 million, the “Silver Phil” has become one of the most popular 1-ounce silver coins in the world. These coins would make a fantastic addition to any bullion stash, whether you are a collector at heart looking for uniqueness and beauty, or if you are a silver stacker seeking to get the most ounces for the money.

It is a beautiful coin!

I have been stacking up on these for investment purposes. They are absolutely stunning. My love for the orchestra also is a motivation for these, but the price is affordable and the value is high.

I ordered coins from the "our design pick" section. I received Austrian Philharmonic. I had passed by the Philharmonics for Maples and Britannia's on several orders. When I received my order I was surprised at their beauty. In the pictures I had seen they seemed more of a flat shine. But when I opened them they were beautiful. Very pleased with them and Money Metals, after many orders, I have never been disappointed. The last order I made was all Kangaroos, which I had never ordered also, very nice coins and very near the price of a round. I'll be ordering again soon. Have fun stacking!

The Philharmonic is a pretty coin, struck bright, though it could have some matte surfaces to give it more visual harmony. It isn't marked "one ounce silver" in English anywhere, but it is nicely crafted and of a standard diameter and thickness to fit common tubes.

You can now sell your Austrian Philharmonic Silver Coin to us, at a price of $24.89 each!