Arguably the most beautiful half dollar coin ever made, the Walking Liberty half dollar is a staple of the US numismatic scene. The coin has had a rich and turbulent history and was hugely popular while in circulation. It became a highly sought-after coin after it was replaced, despite its huge production quantities.

Nowadays, the Walking Liberty coin represents a good way to start investing in silver, whether for those who believe in the potential higher upticks of  or those who find gold prohibitively expensive. Let’s take a closer look at this gorgeous piece of American history.

The story of the Walking Liberty Half Dollar began a couple of years before it was officially released in 1916. Approaching the maximum legal tenure of the Barber coins, the US Mint opted to replace them. At the conclusion of a competition in 1915, the mint director selected Adolph A. Weinman to design the new half dollar coin. Though artistically superb and beautiful, Weinman’s coins were met with great opposition because they were deemed difficult to mint. 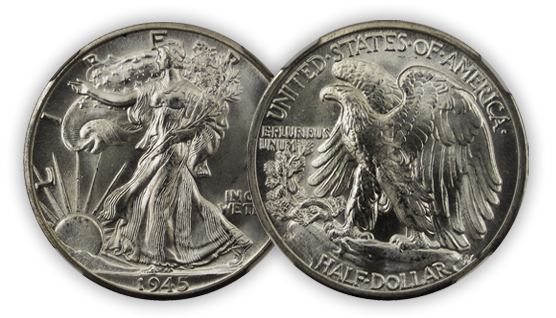 When the production began toward the end of 1916, the fears of US Mint officials proved true, as the newly minted Walking Liberty coins were far from perfect. However, the coin was met with high praise from the general public. It remained very popular throughout its run. Two redesign attempts were made in subsequent years, but they both failed to improve on the coin’s quality.

After World War II, the US Mint looked to redesign US coins and the Walking Liberty happened to be the only one which didn’t require congressional authorization. In 1947, the new Franklin Half Dollar coin bearing the portrait of Benjamin Franklin on the obverse was introduced, marking the end of an era for the Walking Liberty.

Between 1916 and 1947, the US Mint issued 485,320,340 Walking Liberty coins, making it one of the most numerous half dollar coins in US history. In 1986, the obverse of the coin was reused for both silver and gold American Eagle coins. In 2016, the US Mint released a limited centennial edition of the Walking Liberty coin. It was struck in gold and weighed a half troy ounce of gold.

Design of the Coin

The Walking Liberty Half Dollar has perhaps the most iconic design of all US half dollar coins in existence. The aforementioned Adolph A. Weinman designed both the obverse and the reverse.

The obverse depicts Lady Liberty in motion and draped in Old Glory, the folds of the flag waving in the wind. Lady Liberty points toward the east but not at anything visible. The sun is to the left of her feet and the inscription “IN GOD WE TRUST” to her right. Another inscription “LIBERTY” rings the upper half of the coin. The year of mintage can be found beneath the feet.

It is widely believed that Lady Liberty is pointing toward Europe, which was engulfed in the flames of war at the time of design. This was first conjectured in a Walter Breen book.

The reverse of the coin depicts the left side of an American Bald Eagle wings unfolded and perched on a mountain pine sapling. The inscriptions on this side are “UNITED STATES OF AMERICA HALF-DOLLAR” and “E PLURIBUS UNUM.” The reverse continues to be universally praised for its powerful depiction of the eagle.

Initially, the mint marks were placed on the obverse and under the “IN GOD WE TRUST” inscription. In February 1917, mint director Friedrich Johannes Hugo von Engelken ordered the mint mark moved to the reverse. By the end of the year, all Walking Liberty coins were struck with mint marks on the reverse and beneath the mountain pine branch.

The Walking Liberty Half Dollar coin had a face value of $0.50 when it was issued. Its market value is based on silver prices on the exchange. The coin measures 30.63mm in diameter, 1.8mm in thickness, and 12.50g in mass. It has reeded edges like most American coins.

Though there are no particularly rare Walking Liberty coins, some do stand out and can potentially fetch higher prices. There’s only a handful of them concentrated in the early production years. Here are the coins to look out for:

Have in mind that these coins, regardless of condition, may be worth a lot more than the others. As such, they’re in high demand among collectors. However, you’ll want to have the coins authenticated by a reputable dealer or grading service before buying.

There were no significant issues and editions past 1921. The coins were produced in greater numbers in later years and generally carry lower premiums.

The value of Walking Liberty Half Dollars also depends on their condition. If a coin has visible evidence of wear, it is considered a circulated coin. Such coins carry a lower premium and might be a good option for investors who are more interested in the silver content than the coin.

On the other hand, immaculate coins are deemed uncirculated and have a higher premium than circulated coins.

It is worth mentioning that the rarer San Francisco and Denver-minted Walking Liberty coins might have a higher premium than Philadelphia coins.

Investing in Walking Liberty Half Dollar

Thanks to its timeless beauty, the Walking Liberty half Dollar coin remains very popular to this day. It is highly valued among collectors and investors.

However, since the value of the coin often appreciably exceeds the value of its silver content, it might be more popular with collectors than precious metal investors.

What the Future Holds

Walking Liberty coins are a good option to diversify your investment portfolio. They are affordable enough for beginners and those looking to buy and sell in small quantities. This is not to say that a collection of rare Walking Liberty coins won’t fetch a nice premium. The best thing about these coins is their ever-increasing value.