Spotlight on the OTHER White Metals

Those who read our informative articles or listen to our weekly online Market Wrap podcasts recognize that we routinely make the case for owning the lesser-known precious metals – platinum and palladium.

These metals tend to take a backseat to gold and silver. Understandably so, as those seeking protection from a worldwide paper currency crisis will first turn to the precious metals most commonly used as money.

Nevertheless, the return-on-investment potential for the Platinum Group Metals (PGMs) is quite compelling. Here's why...

Demand for the PGMs comes less from the investment sector and more from industrial applications – mainly the automotive industry where the metals are used in catalytic converters. While automotive demand is up slightly in recent years thanks to emerging markets and a rising middle class in India and China (where nearly half of the globe's population exists), it is the supply-side dynamic that is likely to fuel price rises in platinum and palladium. 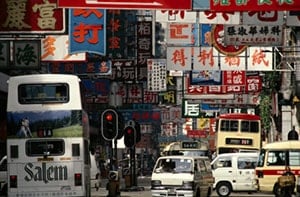 China is sucking up platinum and palladium as its new
urban dwellers buy cars at a phenomenal rate.

South Africa, which produces a majority of the world's PGM supply, struggles with ongoing labor strife at nearly every mine in the country. Add continual power outages (thanks to the breakdown of the country's failing power grid), and a decline in supply is all but assured.

More and more mining companies have been pulling out of South Africa due to a continued rise in the cost of doing business in this "basket case" of a country. Meanwhile, the world's second largest supplier of palladium, Russia, has seen its stockpiles drained over the last few years.

And the decline in mine supply is not getting any help from recycling. Last year, recycling was down over 10% for both platinum and palladium.

Add it all up and supply deficits appear to be a new way of life when it comes to these metals.

According to a leading refiner, Johnson Matthey (known for their popular 1 oz Johnson Matthew silver bar) , the supply of platinum has gone from a surplus in 2011 to a 400,000 ounce deficit in 2012, the most in nearly 10 years. Meanwhile, the palladium deficit reached 915,000 ounces in 2012, the largest in more than a decade.

As supply continues to fall, demand remains steady and appears likely to rise going forward. Two of the world's largest auto markets, China and the U.S., both reported significant year-over-year increases in automobile production during the first quarter of 2013 – up 19.5% and 6.5% respectively versus 2012.

Platinum Looks Good as an Investment, But Palladium Looks Phenomenal

Now, in terms of which metal might be the better investment, consider that palladium is the PGM of choice for Chinese auto manufacturers. Gasoline-powered cars dominate the market in China, meaning palladium can be substituted for platinum in the catalytic converters (not the case for diesel-powered vehicles). 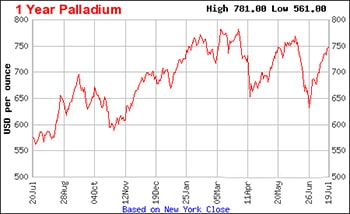 Throughout the first half of 2013, palladium has outperformed all other precious metals, actually posting a gain of better than 10%, compared to big declines in gold and silver and a small loss in the spot price of platinum.

Both platinum and palladium are still well off their all-time highs, however.

Palladium, which now trades at around $750 an ounce, peaked at nearly $1,100 in early 2001 when supply shortages resulted in hoarding by major auto manufacturers spooked by the idea of not being able to get their hands on supply. Such a dynamic could conceivably play out again as the supply-demand gap continues to widen and the global deficit situation worsens.

Likewise, platinum, at about $1,450 an ounce, is well below its all-time high. In 2008, due in large part to rolling blackouts in South Africa which drastically reduced mine production, platinum reached nearly $2,300.